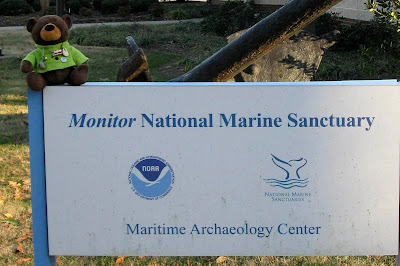 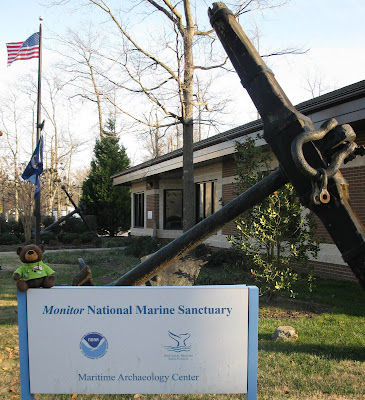 It was a nice trip, but it sure is a lot colder in Newport News, Virginia than I thought it would be. The high temperature for the day is about 30º F (-1º C). Luckily, my fur coat has kept me warm! 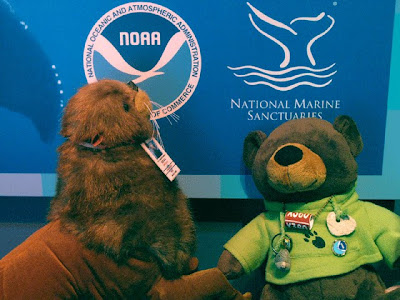 When I arrived, I was met by Sanctuary Sam and the Monitor staff.

This is me with sanctuary Sam, signing my name in the visitors book.

Sam is the mascot for the Office of National Marine Sanctuaries, and he is really nice and seems very excitable. Sam has been very helpful in answering a lot of my questions.

WHO IS NOAH?
So I asked Sam when I would meet NOAH. Sam made a laughing bark kind of sound. He explained that it was not NOAH, but was actually called NOAA. Sam went on to explain that NOAA is a government agency, and the initials stand for the “National Oceanic and Atmospheric Administration.” I did feel a bit silly as I thought Noah was a person I was going to meet. I said to Sam I would call them NOAA if that was alright. The long version is a bit difficult for a bear like me to pronounce.

Sam said that NOAA does all kinds of things, such as predict the weather, track hurricanes, analyze data from satellites, map the coasts, monitor fishing, and protect the ocean. I am sure I will find out a lot more about the things NOAA does over the next few months but if you want to know more about what they do now you can check out their website http://noaa.gov

Sam told me that in 1975 the Monitor NMS was the very first sanctuary created in the United States. I asked Sam why it is named the Monitor, and he explained that it is because this sanctuary is actually protecting a famous US shipwreck—the USS Monitor. The ship was one of the early ironclad ships built during the US Civil War in 1862.

I asked Sam what an ironclad was as it sounded very strange. Sam told me that an ironclad is a steam-powered warship, built in the later part of the 19th century, protected by iron or steel armor plates. The ironclad was built because wooden warships could be easily damaged or sunk if attacked with explosive shells. 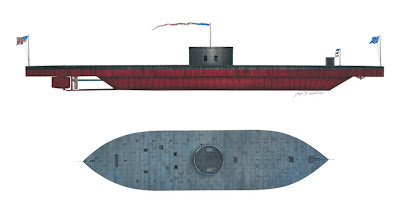 This is a picture so you can see what the Monitor would have originally looked like. 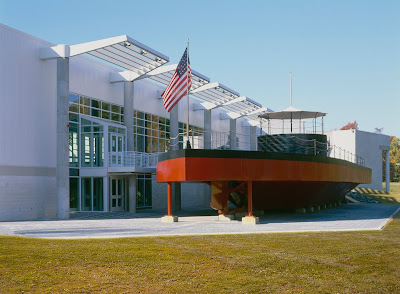 This is a life sized replica of the USS Monitor, at the museum. 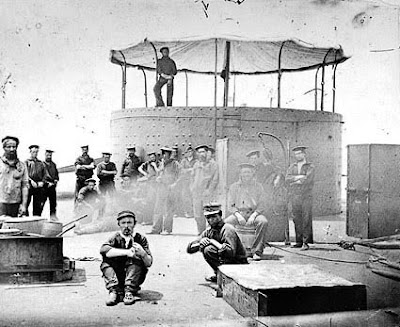 The Monitor fought in a famous battle right here in the area, but while being towed, it sank just off the coast of North Carolina on New Year’s Eve in 1862. 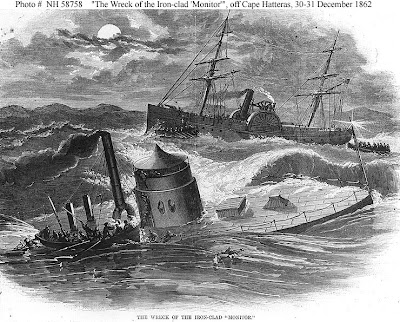 No one ever found it again until 1974. At that time they decided that it was a national treasure, and it should be protected from people who might want to take things from the shipwreck. So it became America’s first National Marine Sanctuary.

As you may already know I am very interested in maritime history, Shoreham where I live is also famous for its maritime history, ship building and its harbour which originally dates back to 11th century. You can find out more about my interest in Shoreham maritime history in my earlier blog entry 17th September 2009 "Maritime History".

Well, I wonder what I will find out next. I can’t wait to start learning more about the sanctuaries, shipwrecks and the ocean! Keep following my blog and I will let you know more about what I am learning!