Ed Dives in the Sanctuary Museum

I had a very exciting day today at the sanctuary museum. Today we got the chance to try out my new underwater housing that will allow me to explore some of the sanctuaries underwater without getting wet! I really felt like an explorer. 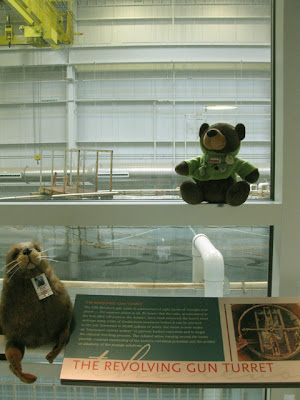 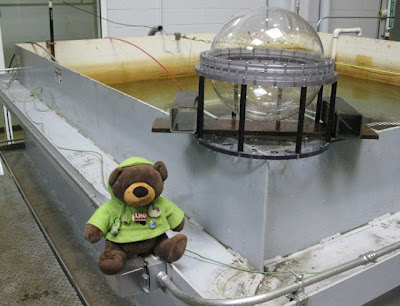 The housing was built especially for me by Ed (the human) Williams who works for a company called IRobot. I wasn’t keen to travel down in the housing in the ocean, just incase it leaked. However, I didn’t want them to try it out without me inside it either. So Shannon suggested that we try the housing out in one of the museum tanks. This meant that I would get to examine part of the monitor wreck up close as well.

So early this morning everything was set up for my dive. Sam wished me luck and said he would watch from the side, ready to dive in the water if I needed help. 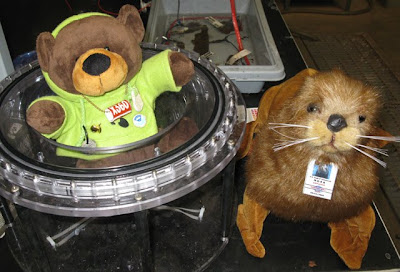 You may not know this but sea lions are excellent swimmers. Once I was inside I felt like an astronaut but instead of going into outer space I would be diving into the murky depths. 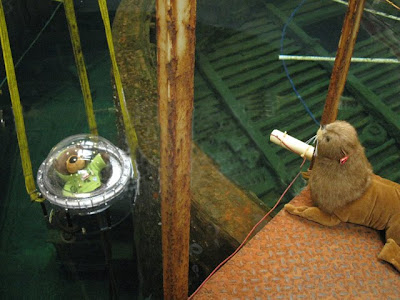 When I was safely inside, the housing was attached to a winch so I could be slowly lowered into the tank. There was a chap from the local newspaper too, taking pictures to record my first dive. 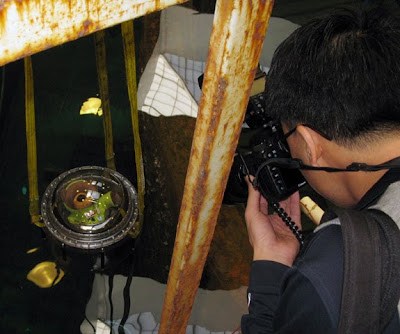 It was very cool. Suddenly there was a whir of motors and a jolt as I was lifted up, swung out and gently

lowered down to the water. Very soon the water was lapping around me and slowly the water closed in above me and I’m diving down into the tank.

Wow! It was so amazing to go into the big tank with the Monitor’s turret! No bear, or member of the public has been down into the turret tank before. I looked out the dome and I could see the metal gun turret in front of me. It looked like there was some brown stuff growing on the metal. Very soon I was heading back up into the light and was lifted back onto the side of the tank. It was brilliant. I can’t wait to try it out in one of the other sanctuaries.

When I was back on dry land, Sam asked me about the dive. I said it was absolutely amazing. You may remember I noticed some stuff on the metal and so I asked Sam if he knew what it was. Sam told me that when the turret was brought up from the ocean floor it was covered in the stuff and it is called concretion! I asked if he meant concrete. He said it is sort of like concrete. It was made up of minerals that are dissolved in the ocean water (remember when I found out what sea water was made of). The concretions are also caused by oxidation of the metal (we call it rust) and even marine animals create a type of “cement” that attaches to the shipwreck.

As you know, the Monitor was an iron clad and metal rusts when it comes in contact with water, so the turret was pretty rusty. Sam said that in the ocean concretion can actually help to protect the Monitor because it adds a layer between the metal and the water, thus keeping the water from rusting the metal even faster. But here in the conservation lab, they remove the concretion and stabilize the metal. He showed me these pictures of pieces before the concretion was removed for conservation…pretty cool. 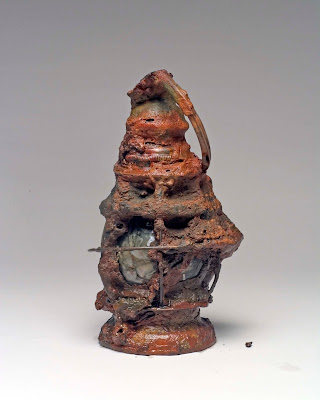 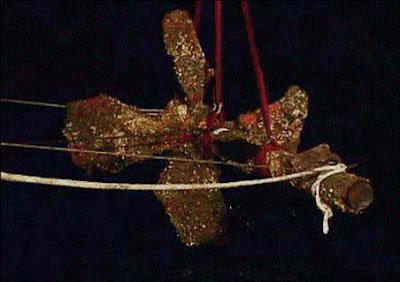 The picture below shows the propelor after it had been cleaned up and preserved. 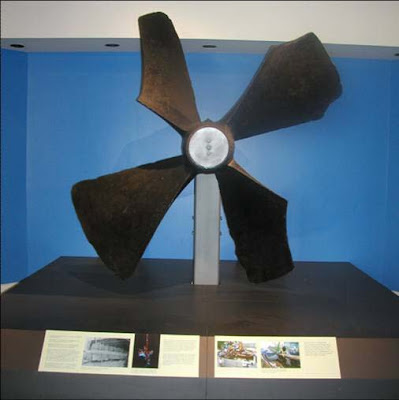 If you want to find out more about how metal things rust, try the following. You will need two glass jars, one

filled with sea water and one filled with normal tap water. You will also need two hardware nails. Put one nail in each jar. Which nail do you think will go rusty first?

Oh yes, you can also watch me dive into the museum tank on YouTube, follow the link below.

"Ed the Bear in Monitor Turret"