Ed finds out more about the USS Monitor

I am having a lot of fun here at the Monitor! Sam is keeping me busy and telling me loads of interesting stuff. Yesterday we went on a tour of the area, and I learned more about the Monitor and the US Civil War. Did you know that the Monitor fought against another ironclad ship named CSS Virginia? It must have been a titanic battle as both ships would have been equally matched.

The battle was called the Battle of Hampton Roads. Both ships thought they won, but really neither won the battle. They both turned around and each thought the other ship was running away. Therefore, they both claimed the victory. 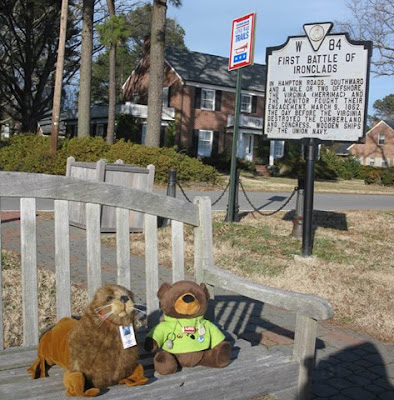 We went to a place in Newport News called Monitor Overlook. If I had been standing there during the battle, I would have had a perfect view of the battle, but it would have been a little too close for me with all those cannon balls flying through the air! 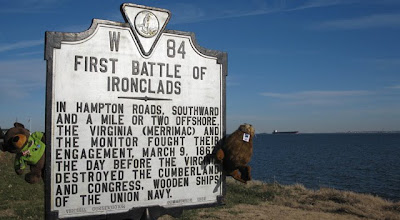 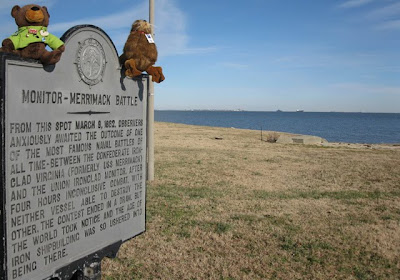 If you notice in the pictures there are lots of ships in the background. The area where the battle took place is near the mouth of the James River (named after England’s King James I) where it empties into the Chesapeake Bay. The Hampton Roads area has lots of ships because this area is home to one of the largest US Navy bases and it is also a huge port city. I wondered though with all those ships coming and going if a lot of pollution gets in the water. Sam says unfortunately some pollution does end up in the water.

The harbour port next to the beach back home in England is very busy too and also has lots of boats coming and going. Shoreham Port is a major UK port for transporting aggregates, sawn timber, steel, oil, locally grown cereals and scrap metal. Shoreham

Sam says that the Chesapeake Bay has been in trouble for a long time, but with lots of people helping, the bay is getting cleaner. I definitely want to learn more about that before I leave! 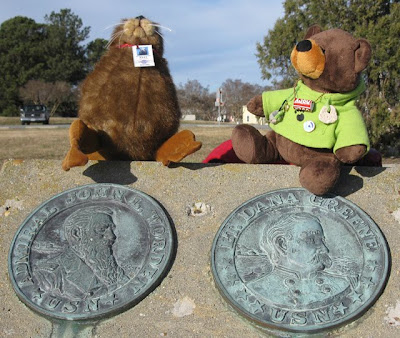 During the battle the Virginia gunners concentrated their fire on Monitor 's pilothouse, a small iron blockhouse near her bow. A shell hit there blinded Lieutenant John L. Worden , the Union ship's Commanding Officer. He is pictured here with Lt. Dana Greene (Monitor's Executive Officer) who took over the Monitor when Lt. Worden was injured.

I have made two new friends, Shannon and Lauren, who have also been looking after me since I arrived. They are great fun. They have been arranging my visit at Monitor and also my travel plans, accommodation and stop over’s for the rest of my trip here in the US.