Ed the Bear arrives in California

Wow, I made it all the way across the country from the east coast and have landed in San Francisco, California. Some of my buddy Steve’s family live in California, but I hear California is a big place so I guess I won't get to see them. I know Steve's cousin Geoff has a child called Sabrina who is really interested in the ocean as well. Hi Sabrina if you are reading this message.

I did not realise just how far it was from one side of the US to the other. It's about 3,000 miles from the east coast to the west coast of the US. I’m glad I didn’t have to walk. California looks quite different to Virginia on the east coast so luckily Sanctuary Sam is from this region and has been pointing out all the amazing things to know about this incredible part of the world. First, I saw the Pacific Ocean which is big! Sam, saw a few of his buddies who started barking at us from the water, as Sam is a California Sea Lion. As you know Sam is now an ambassador for the sanctuaries. 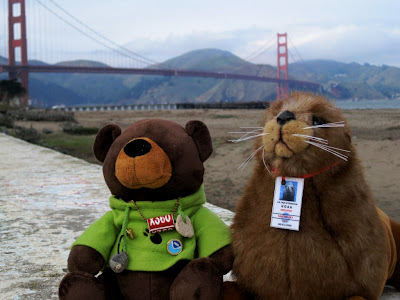 As you can see in this picture, we are in front of the world famous Golden Gate Bridge that crosses San Francisco to Marin County California. The River Adur back home in England is very small compared to this great body of water. We have a small bridge crossing the river, but the Golden Gate Bridge is enormous. It’s hard to imagine how they even managed to build it across the bay especially as the total length of the bridge spans 1.2 miles. The area under the bridge drains approximately 40% of California’s water from the Sierra Nevada mountains to Sacramento and San Joaquin rivers to San Francisco Bay and out to the ocean, which has 3 neighboring National Marine Sanctuaries outside it.

The waters outside the Golden Gate are so productive with marine life that 3 Sanctuaries are here and I will get to visit all 3 of them. To the south is Monterey Bay National Marine Sanctuary, where I hope to see a sea otter and learn about kelp forests and the deep sea Monterey Canyon. Right outside the Golden Gate is the Gulf of the Farallones, where apparently there are quite a few big white sharks, they tell me I am just too small to be a prey item for a white shark, so not to worry.

Back in England I helped Steve run a course on sharks, so hopefully I might see one while I am here. And just north of that is Cordell Bank NMS, where an underwater mountain is thriving with amazing colorful invertebrates and fishes. This whole region is known to attract animals all the way across and around the Pacific to feed here because there is so much food in the water. Whales, seabirds, and elephant seals, and more thrive in these cold, food rich waters.

A really wet and intense storm has been in the area for a few days, bringing huge amounts of rain to the area. While residents are happy for the rain as the state has been in a draught, I witnessed large amounts of plastic and styrofoam bits washing up on the beaches as a result. 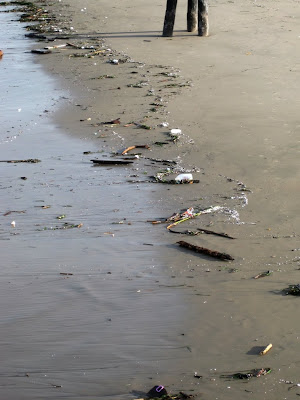 These items were probably washed into the ocean upstream somewhere and the huge wash of water brought it here. This is a lesson that we can all work harder on to prevent, by making sure we leave nothing on the ground and pick up litter whenever we see it, so it doesn’t wash into the ocean and get eaten by ocean animals. You may remember that when I was visiting Methea at Spokane Community College, (in Washington State, the next state up) she told me about the problem of chemicals and litter being washed into rivers and flowing down stream into the oceans. Now I have seen it for myself.

Bye for now Ed and Sam
Posted by Steve Savage at 13:11