Today, I asked Sanctuary Sam to tell me more about the pollution problems in Chesapeake Bay. You may remember from my last message that Chesapeake Bay is where the USS Monitor fought its famous battle. There was a picture of it in my last message, where Sam and I were standing by the sign; there were lots of ships in the pictures too. 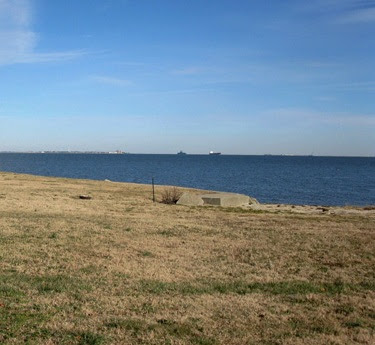 
Sam was telling about all the wonderful sea creatures that live in the bay such as oysters, blue crabs, and different kinds of fish. Sam said sometimes it is hard for them to breathe in the water. Breathe?! Did you know that underwater animals breathe? Well, they all need oxygen to survive just like us, but they have gills instead of lungs. I remembered that the aquarium tank at Spokane Community College had pumps and filters to circulate the water and keep it healthy.

As you know, I have helped with a lot of beach litter clean up but Sam told me that a lot of the pollution in the Chesapeake Bay is stuff that you can’t see. So, even though sometimes you can see stuff floating on top of the water, it is the invisible pollutants that run off the land and into the water that have made the bay so sick.

I asked Sam what are pollutants and he said that they are chemicals and substances (often poisonous) that can come from a lot of different sources. These sources could be fertilizers from farms and our yards (this is what we call gardens in England) or chemicals from industrial plants. Methea told me about this when I was helping out at the Community College in Spokane. We watched the snow melt and run into the river, which would flow down to the ocean. Methea said that chemicals from the land can also get washed into rivers and down to the sea where they could be very harmful. Sam said this is what can happen when the chemical pollutants find their way down into the ocean.

Sam told me that some of these pollutants actually make a lot of algae grow in the water. When the algae dies and sinks to the bottom of the bay, it uses up a lot of oxygen as it decomposes. The more algae that dies, the less oxygen there is in the water for the other animals. This creates something called a ‘Dead Zone’ which is an area where almost none of the underwater animals can live! I wonder if there are any dead zones in the water around England.

Sam did tell me that there is good news for the Chesapeake Bay! There are many organizations that are trying to make the bay healthy again by reducing pollution. Also, President Obama announced that the Chesapeake Bay is so important that it is the United States Government’s job to help clean it up! The bay is slowly getting cleaner and I hope that the next time I come back the water in the Bay will be much healthier.