I found out today that it’s not just the oceans that are very complex, the whole planet is. While the earth surface seems to be solid to us the earth’s surface is actually made up of separate pieces which are called plates. They all fit together a bit like a jig-saw puzzle. These plates are constantly moving, but very slowly. In fact in a year the plates will only have moved a few centimeters. The places where these plates fit together are called fault lines. These are also places where earthquakes can occur. This is quite a difficult topic to cover in my blog so if you want to find out more about these plates and fault lines you can check out the web link below.
http://www.moorlandschool.co.uk/earth/tectonic.htm

The reason I mention this is because I found out that California has a major fault line. I discovered this was called the San Andreas fault, which is a fault that runs throughout California and is famous for causing the 1906 earthquake that nearly devastated the city of San Francisco. There are many fault lines in the Bay Area that are active and produce quakes. Jennifer, one of the education people here at Cordell Bank National Marine Sanctuary took me and Sam to see where part of the fault line is. Although you can see the fault lines marked on maps, you can’t see the actual fault line in real life. However, Jennifer showed me the blue poles that mark where the fault line runs. 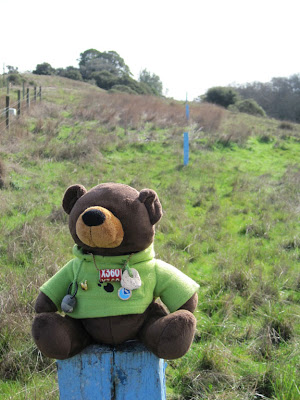 I was interested to hear that the San Andreas fault separates the continental plate from the Pacific plate, so I could not resist hopping between plates over the fault line and back again! 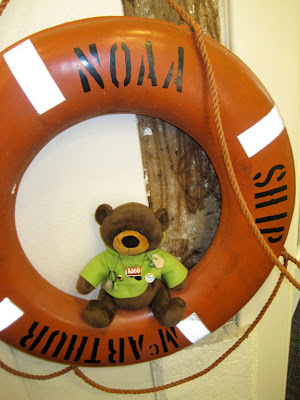 Unfortunately I was unable to visit Cordell Bank itself, as its 20 miles offshore and the ocean is quite wild here in the winter time. There has been a powerful storm in the area for sometime so the seas have been quite unsafe for me to visit, so instead the staff at Cordell Bank showed me some of the stuff they use to learn about the waters at Cordell Bank National Marine Sanctuary. 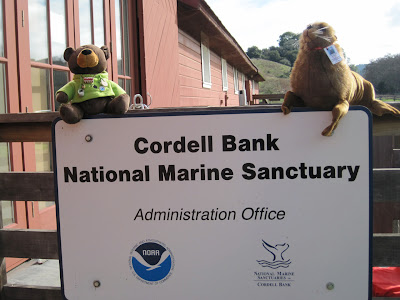 Jennifer showed me a special coat called a “float coat”. They don’t come in small bear sizes so I tried on a human sized one which as you can see is a little big for me, but it was still warm and toasty! 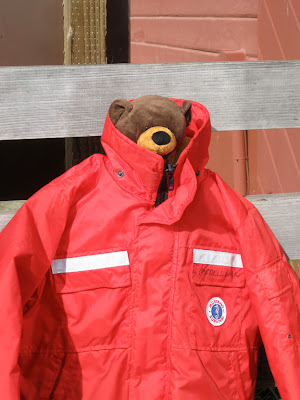 These coats have built in flotation for researchers on a boat, so they can be safe and stay warm too. If they do accidentally fall in the water the coat will keep them afloat. Its water proof as well! Sam said the air temperatures out on the Pacific can be quite chilly even during the summer months, so if you don’t have fur like me, layering clothes for warmth is important. 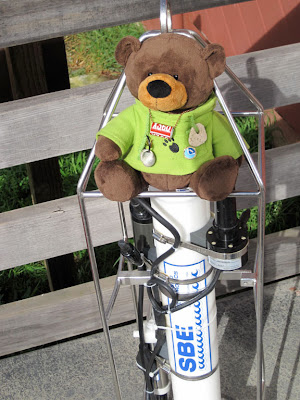 Check out this crazy instrument. This is a CTD, instrument which stands for Conductivity, Temperature, and Depth. The frame houses special sensors which records information about the surrounding water. The instrument is lowered to just above the seafloor and collects data the whole way down to help scientists understand what the water column is like. A water column is an imaginary area of water (column shaped) from surface of the ocean down to the seabed. Apparently when they do this test near shore outside of San Francisco, they can detect the fresh water that runs out of the San Francisco Bay, whereas farther offshore and north away from the bay, there is much less fresh water to be detected.

The staff here also have a special submersible (like a miniature submarine) to help the research team use to help them monitor and explore the seafloor habitats of Cordell Bank. 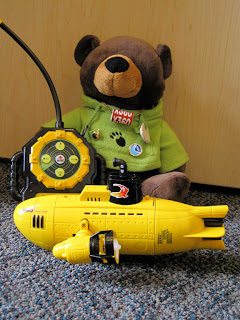 They gave me a controlled model one for me to see. Of course this one is even too small for me, but you get the idea. In an area like this, where the habitats are too deep to SCUBA dive in, this is a great way to learn about this sanctuary.