The pieces of the wreck in the museum are being preserved. The revolving gun turret tank I dived in is filled with freshwater. This will get rid of all the salt which would make the metal rust very quickly. It has to stay in the tank for 15 years! The turret was raised from the seabed in 2002 that means it will need to stay in this freshwater tank until 2016 years. The museum has a replica of the gun turret (below) so people can see what it could have looked like. 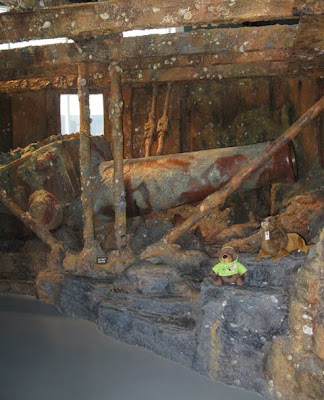 This equipment (below) is called the spider. This is what NOAA used to raise the turret from 230 feet (70.104 m) beneath the ocean. 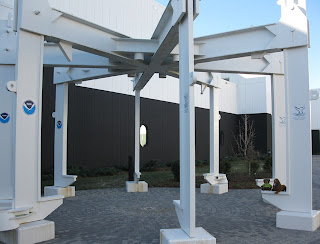 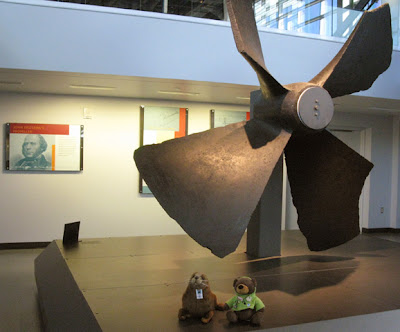 This is the preserved propellor from the monitor. There is also a picture of John Ericsson, the Swedish man who designed the Monitor. 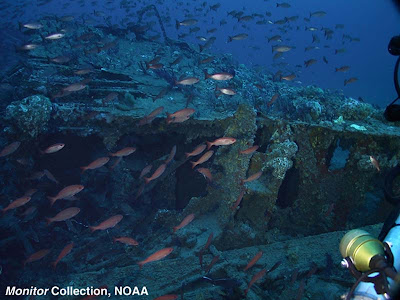 He said that animals like sponges, coral, lobster, and a lot of fish live on or around the Monitor shipwreck because it is now an artificial reef too!

Sam said this movie link has some great pictures of articfical reefs. http://sanctuaries.noaa.gov/missions/battleoftheatlantic2/reefs.html

There are a lot of shipwrecks off the Sussex coast where I live back in England. I wonder if they have become artificial reefs too and what marine animals live on them. I will try and find out when I am back in England next.

Invasive species
One fish that Sam was telling me about was called the Lionfish. These fish are beautiful, but he said they are an invasive species. 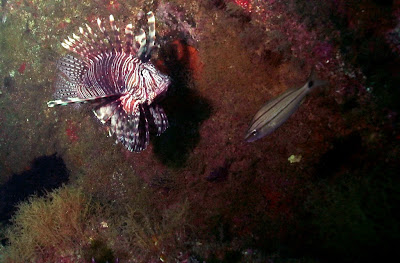 An invasive species is a animal or plant that is found in an area outside of its natural habitat and has a damaging effects on its new environment. Sam told me that lionfish usually live in the Indian and Pacific Oceans, but now also live in the Atlantic Ocean and are living on the Monitor! I said to Sam that the lionfish must have swum a long distance to reach the monitor in the Atlantic Ocean. Sam told me that some people keep lionfish as pets and scientists think that the lionfish in the Atlantic Ocean were released from these home aquaria. Sam says that the Lionfish are not good to have at the Monitor because they can be very aggressive and can cause the amount of other fish to decline.

I told Sam that we also have a problem with invasive species on the nature reserve back home in England. The nature reserve is home to rare vegeated shingle plants which grow in the pebbles. Garden rubbish thrown onto the beach from nearby houses has encouraged "weeds" and garden plants to grow on the beach and now parts of the reserve are being swamped by these invasive plants which are damaging the habitat.