Well I have been very busy since I have been back in the UK preparing for a special event called “Isn’t it Bonkers” which we took part in yesterday. The aim of this event was mainly is to raise awareness of global issues, highlight the crazy things we do that waste resources and show people how we can all do small thinks to reduce our impact on the environment. When I heard about it I knew we had to take part as this is definitely my kind of event.

This is the display we took 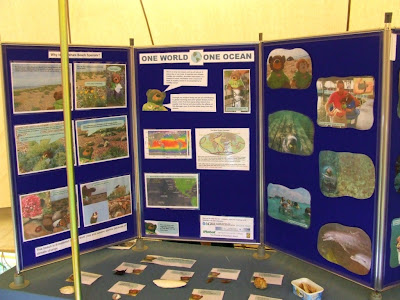 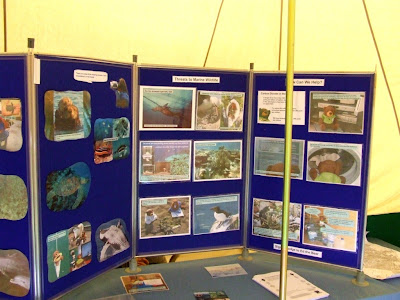 1. What’s important about Shoreham Beach, focusing on the rare vegetated shingle habitat and the wildlife that it supports. It also mentions how Shoreham Beach (my local beach) may also be threatened by climate change (which is the reason for my travels - to investigate global issues) 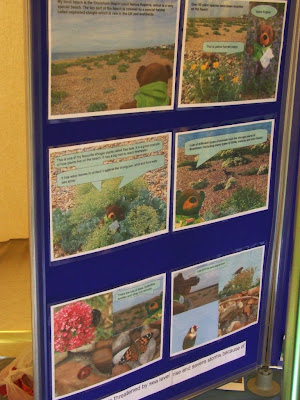 2. One World One Ocean – my message about how we all rely on the oceans every day. 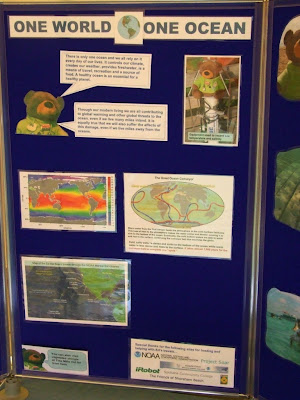 3. Some pictures from my travels – where I met a nesting turtle with Fred the Happy Face Monkey, Scooter a rescued turtle, my visit to the youth summit and dives on a reef, a ship wreck and with dolphins using my diving bell. 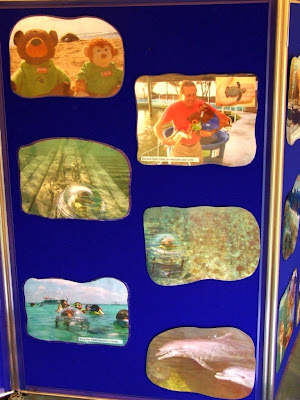 4. Some pictures from my travels – a selection of marine wildlife I had the privilege to see first hand. 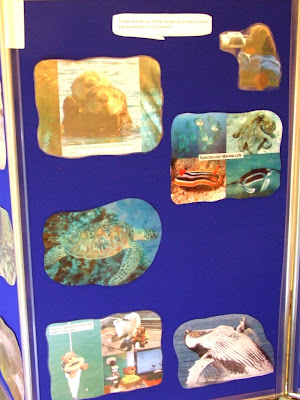 5. How we are all contributing to the damage of the beautiful oceans and threatening marine wildlife. This inlcuded marine litter, sea temperature rise killing corals and disrupting food chains (latter even in the UK), oil pollution, and acid oceans (caused by oceans absorbing too much carbon dioxide from the air) 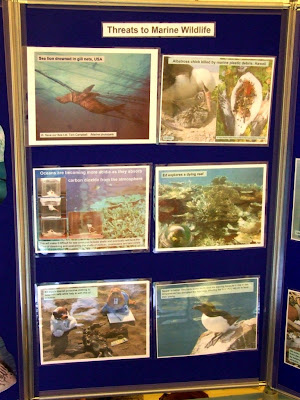 6. How can I help – looks at simple ways that we can reduce our impact on the marine environment. 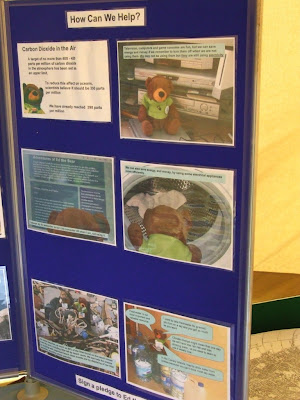 We also gave out a sheet about global issues linked to the last two panels. Side one included info about global issues. On the second side, children (and parents) made a list of all the things they do which might impact on the environment. They then made a list of how they could do things differently and then signed a pledge to me (at the bottom) to promise they would do the things they had listed. The aim is that they pin their pledge on the wall so they can see it everyday. 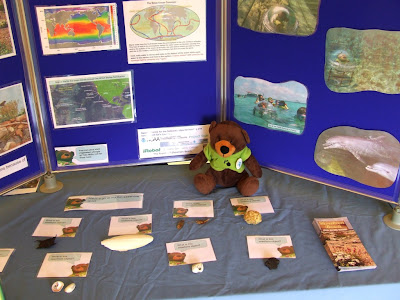 This was a fun quiz about our local beaches. We chose a selection of objects from the beach, each had a label, and a picture of me saying “guess what I am”. 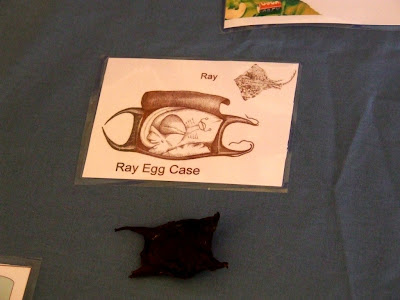 The answer was on the reverse side, plus a picture if necessary – e.g. for the cuttlefish bone, included what a cuttlefish looks like.
We also had an acid oceans experiment, using a seashell placed in a jar of clear vinegar, to show the affects that a weak acid can have on sea creatures.

PowerPoint
My buddy Steve put together a special PowerPoint, a celebration of the oceans and highlighting global issues. The presentation started on Shoreham Beach and then looked at global locations. Steve demonstrated this talk once early afternoon and then left it running in a loop. 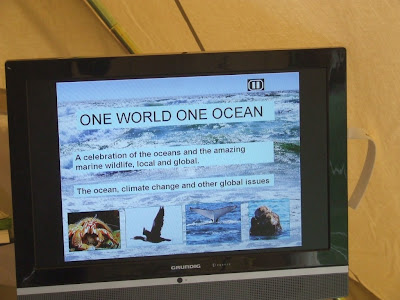 We spoke to lots of people about the oceans and my adventures. I think people visiting the exhibit and the other stands at the event learned a lot of important stuff.
It was a busy day, but it was lots of fun talking to all those people.
Bye for, now
Posted by Steve Savage at 09:10 No comments: