Aloha
After we got over the relief that we were all safe, I was disappointed that we did not get to take part in the whale count as planned. Although we couldn’t count whales “officially” , Sam spoke to some of the sanctuary staff and we went out to Lanai Lookout to try our hands (and paws and flippers) at whale watching with the help of the sanctuary staff (all of whom are camera shy so don’t appear in the photos). With some patience and luck (from our 2010 Sanctuary Ocean Count t-shirts we were wearing) we did get to see some whale activity including several blows, a couple of tail slaps and even a breach! When a whale breaches it leaps clear of the water and then crashes down into the ocean with a huge splash. Wow, it was an amazing sight. 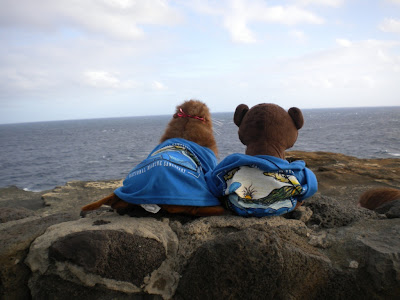 I asked the people from the sanctuary why the whales perform those behaviors. They told me that scientists have a variety of theories. The whales might be displaying dominance (showing off!) or maybe they are trying to remove barnacles. They grow on the whales skin and must itch terribly, only they can’t reach to scratch them with a flipper. I know what that’s like but us bears can rub our backs against a tree, it feels ohhhhh so good! May be the whales are just playing and having fun! The scientists aren’t exactly sure yet (and Henry’s not telling – he just said it was a whale thing).

After whale watching I wanted to do a bit of surfing. I had learned some new moves and I wanted to test out my new skills! Sam came with me, but decided to have a quiet afternoon of relaxing with his beach ball on the sand. 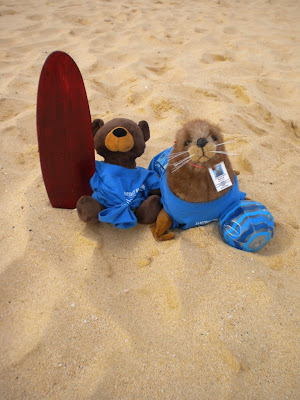 So I joined other, more veteran surfers and I think I did pretty well considering I am only a newcomer to surfing. Even Sam, being quite the body surfer himself, was impressed! “Not bad for a bear!” He exclaimed, clapping his flippers as I rode a wave into shore. 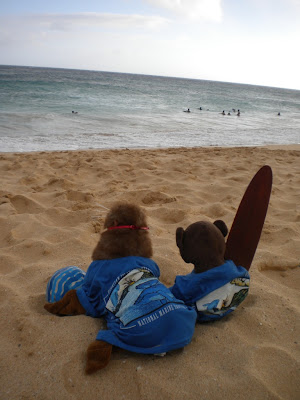 We sat on the beach for a while watching the surfers. Then my stomach started to rumble, I'm hungry lets get something to eat. Sam agreed, we took one last look at the surfers and headed up the beach.

Aloha everyone, Ed and Sam
Posted by Steve Savage at 09:15