The science of surfing

The next stop on our trip was Kalaloch beach. The Winter storms in the Northwest can be so rough they actually lift large, dead, logs and deposit them on the beaches. 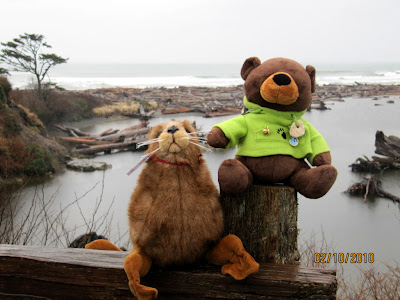 It must be pretty dangerous to be on the beach when that is happening. I'm glad its much calmer today.
Sam was dying to go for a swim. He said sea lions are happy to be out of the water for long periods of time, but his fur gets very itchy after a while a good swim would sort it out. Sam invited me to go surfing. Sam said he keeps a spare surf board and wetsuit in the back of the car when he is travelling, just incase he needs to lend it to anyone. Sam, of course doesn’t need one as he can surf the waves with his body.

Sam said I would need a wetsuit as the water is very cold. I asked Sam if he would feel the cold. He said, like many other marine mammals he had a thick layer of blubber, or fat, which keeps him warm. He said it works just like a wetsuit. In fact, the sea otter, that also lives along this shore, is the only marine mammal that does not have blubber. Instead, sea otters have a lot of hair: 170,000 to 1,000,000 hairs per square inch! 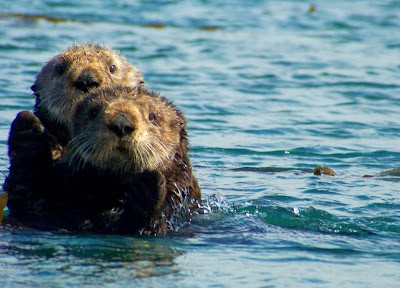 That's a lot more than my fur. Sam said Sea otters have so much hair that their skin never gets wet! That is why sea otters do not need a wet suit and I do.

Surfing was great fun and I learned some science too. Waves are created when the wind blows over the sea. The friction between the wind and sea transfers some of the winds energy into the ocean. This makes a wave which travels across the ocean as a wave of energy. (Try blowing the surface of the water in washing up bowl. This will make a small wave). 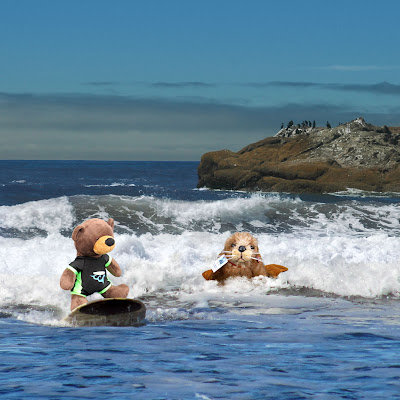 To surf, I must already be moving forward, but the trick is moving at the right time. Now the energy of the wave will push me forwards and all I have to do it keep upright and not fall off. Easier said than done, but thats why I am wearing the wet suit. Wipe out!
North of Kalaloch is La Push, home of the Quileute Tribe. For those of you who are Twilight movie buffs, Bella’s friend Jacob is Quileute and goes to school in La Push. My buddy Steve's daughter is a great twilight fan, the books and the movies, she will be so jealous.

The most northwestern point of this area of the US is Cape Flattery which is on the Makah Indian Reservation. Jacqueline said that this year the Makah Tribe is hosting tribal journeys. Tribal Journeys is a weeklong event that celebrates the canoe culture of the Northwest Coast Native Americans and First Nations. I wish I could stay around and take part.

I really enjoyed my visit to the Olympic coast. I hope I will get to return soon and maybe even go out on a boat to tour the Sanctuary and see some of the amazing marine life that lives in the ocean.

Back to the Hawaiian Islands for my next stop to help out with studying humpback whales. I might even get to try my underwater housing in the ocean for real.