Sam and I headed for the coast with Jacqueline Laverdure, Olympic Coast National Marine Sanctuary Education and Outreach Specialist. The Olympic Coast is one of the last wilderness coastlines in the United States. There are four coastal tribes –the Quinault, Hoh, Quileute, and Makah who live on the coastal areas of the Olympic Coast, as they have for thousands of years.

In the Ocean Science program, fifth graders get to look at plankton through microscopes. You may remember from a previous report that plankton are very small plants and animals that form the base of the ocean food chains. Jacqueline and Karen set up a special microscope for me to take a look at some plankton. They are fascinating to watch as the swim around in jerky movements. They look like creatures from out of space. 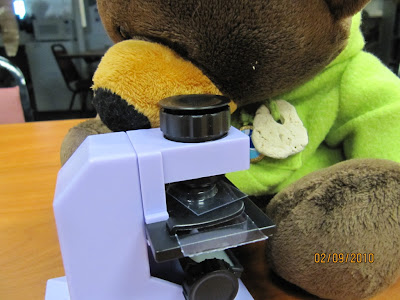 Taholah’s mascot is the Chitwin, or black bear. Chitwins are revered throughout the Quinault Indian Nation’s history. They have a deep respect for the Black Bear and I was pleased to see that my black bear cousins had such a special place in theri hearts. I thought this was so special that I asked if  I could have my picture taken with a sculpture of a Chitwin. 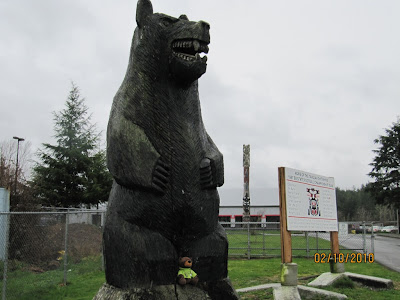 In the background you can see a totem pole.
Bye for now, Ed and Sam
Posted by Steve Savage at 16:05