Hi all
Sam and I have arrived at the Oahu office of the Hawaiian Islands Humpback Whale National Marine Sanctuary, we were both feeling a bit stiff after our long journey. We were met by the office mascot, Henry the Humpback, who greeted us straight away and wisked us away for a tour of the office—the staff here barely had a chance to say hello! We had arrived here to take part in the annual ocean humpback whale count. 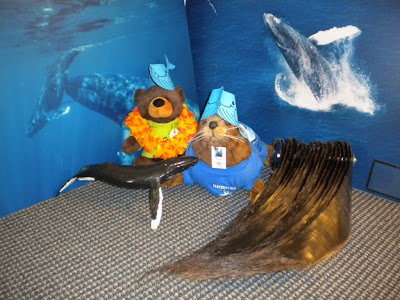 Henry seemed very excited to have company! Henry gave us each whale hats as a welcome present, which fitted perfectly. To help with the humpback whale count we would need to know more about the whales here and the sanctuary. As we toured the office we learned lots of interesting facts about the sanctuary: where its boundaries are and that it covers 1,370 sq. miles of ocean.
We also learned that the humpback whales are not found on the sanctuary all year round. Infact most of the humpback whales migrate thousands of miles to the Hawaiian Sanctuary from their rich feeding grounds around Alaska. There is lots of food for them in the summer, krill a type of shrimp that lives in vast shoals like fish. They catch this krill by filtering it from mouthfuls of water using baleen - this is what humpback whales have instead of teeth. We eevn got to touch a piece of real humpback whale baleen. 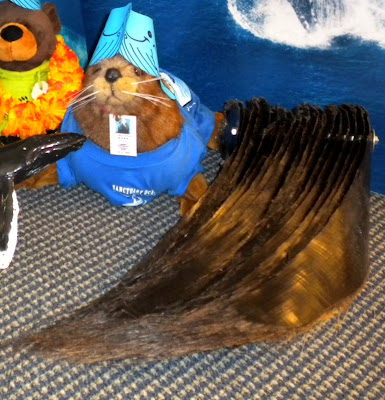 However, its not a good place to give birth to baby whales so they swim all the way to Hawaii where the waters are warm and calm.

I asked Henry if we had a good chance of spotting a whale. Henry told us that up to 12,000 whales come here annually between November and May. The breeding grounds here are also especially important since humpbacks are currently on the Endangered Species list though their numbers are recovering.

I was amazed to find out that the whales don’t eat while they’re here in Hawaii, which can be several months. My stomach started to rumble just at the thought of it. The adult humpback are beautiful blue/black colour with white tummies and flippers. But guess what, a baby humpback whale is completely white when its born.

Henry even showed us his very own picture in a book on Hawai‘i’s humpbacks of when he was a calf—Henry himself was born here in Hawai‘i! 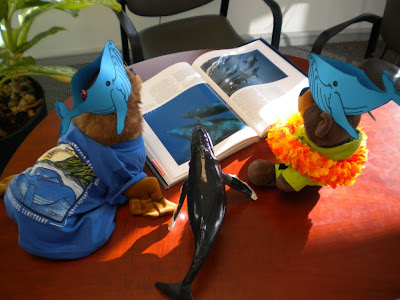 Sam and I took over in the sanctuary for the sanctuary’s superintendent, Naomi McIntosh, for part of the morning and she was very impressed with how we were running things. The staff here thought we made a great team! 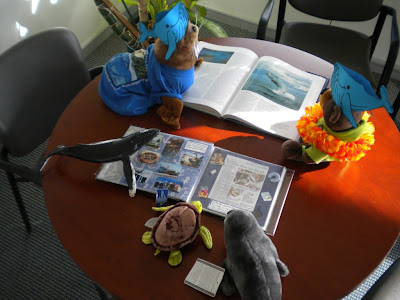 After a short meeting with two other very important representative members of Hawai‘i’s native wildlife—Harry Honu (a sea turtle) and Malia Monk Seal—in which we talked story and Sam and I impressed them with tales of our travels so far, we were all ready to call it a day! After all, the next day was the sanctuary’s most important volunteer project, the Sanctuary Ocean Count, in which volunteers from all around Kaua‘i, O‘ahu and Hawai‘i count whales and record their behaviors from shore. This information is then compiled with data from the other counts over the past 15 years and can give us important information about the numbers of whales that visit each year and how they are using Hawai‘i’s coastal waters. Me and Sam are here to volunteer as well, so we had better have an early night.

See you all tomorrow for the whale count, Ed and Sam.
Posted by Steve Savage at 09:43