Well, we have both arrived safely at our next destination, the Olympic Coast National Marine Sanctuary.


Sam showed me around the discovery centre which he said is the best place to start, because there is so much to see. The sanctuary includes a very big piece of coastline. In fact 135 miles of beautiful shoreline with very little human buildings and has more than 48 miles of wilderness beaches – un-spoilt and natural. This area is very different to my coastline back home which has many houses, a harbour and industrial development.
And guess what, the Olympic coast sanctuary also includes the ocean to about 35 miles from the shoreline. The coastline here is home to 29 species of marine mammals, hundreds of species of birds, and thousands of species of fishes. My buddy Steve will be so jealous. Sam also introduced me to Hannah, who told me that Native American peoples - the Hoh, Makah, Quileute and Quinault - have lived along this coast for thousands of years and continue to do so today. When I was with Ron I had the chance to meet some of the S’Klallam in Port Gamble. I hope I get the chance to meet these fascinating native people who lives are entwined with this amazing coastline.
I saw a huge 3-D map showing the Olympic Coast National Marine Sanctuary boundaries. Sam told me that Olympic Coast National Marine Sanctuary has three underwater canyons – Nitinat, Juan de Fuca, and Quinault. These underwater canyons are steep-sided valleys on the seafloor. Sam told me that the lighter blue areas on the map showed the shallower continental shelf close to land and the dark blue, sunken-in areas were the deeper ocean areas.

Sam explained that deep water is very different to shallow water near the surface. This is because deep water is colder, has less light, less oxygen, and more pressure. The deeper you dive the more water is above you. The weight of this water pushing down is what we call pressure. Animals that live near the surface would be crushed by the pressure if they dived too deep. Some animals have adapted to live in deepwater with this pressure, but would die if they came to the surface. 10m below the surface and the pressure is 2 times greater than at the surface. At 1000m the pressure would be 100 times greater than at the surface. Humans would need a submersible (mini-submarine) to reach that depth and only a few whales can dive that far down. Sam said he was a very good swimmer but 1000m was far too deep for him to dive.

So the animals that live in the deep water habitats are quite different to those that love near the surface. In the deep water off the Olympic coasts live deep sea corals, usually at depths between 80m and 1000m. They are different than tropical reef corals found in shallower, warmer waters in the tropics, such as the corals I saw in the sea around Kauai.

Most tropical reef corals have algae called zooxanthellae that live in their cells. The algae take energy from the sun and convert it into food for the corals. Deep sea corals do not have these algae because there is no sunlight in the ocean depths. They have to rely on stinging tentacles to catch their food.

In the sanctuary the deep sea corals live in the Juan de Fuca Canyon. I learned that even though corals may look like plants, they are really animals related to jelly fish. Sam and I investigated the coral Lophelia under a large magnifying glass! 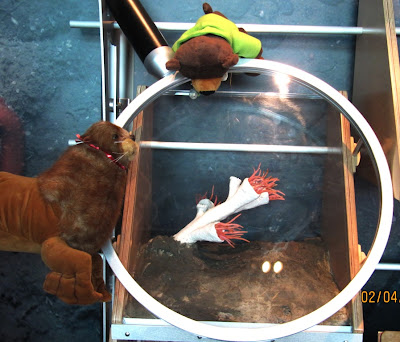 Next, Sam showed me the exhibit of Paragorgia. Although the coral has one hard skeleton, I can see many individuals coral animals (called polyps) that live in the skeleton. These white polyps live in a colony. While the whole colony can grow to one metre tall each individual polyp is usually less than a centimetre! 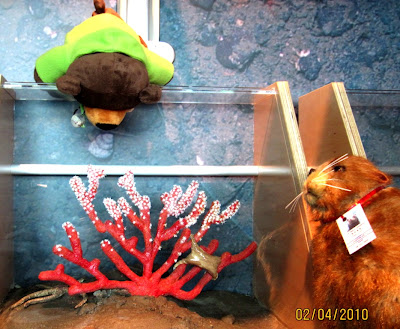 Primnoa was the last coral I saw in the Discovery Centre. This exhibit showed how corals provide habitat for many other animals. The display said that these rockfish live amongst the corals, but other animals like invertebrates (animals without backbones) are also found among corals. 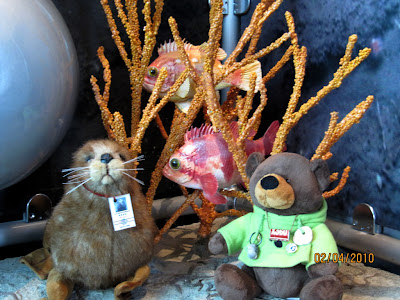 Scientists use submersibles (crafts that go underwater) for deep sea research. While no one was looking me and Sam climbed up on top this submersible for a closer look.

This is called the Deep Sea worker and is a one-man submersible. The Deep Sea worker is great for taking photos or making observations, but a machine like the ROPOS (Remotely Operated Platform of Science) is better for deep sea coral research.
The ROPOS is not as dangerous as a manned submersible. Researchers do not need to be inside the ROPOS to operate it. Instead, the ROPOS is attached by a cable to computers on a ship above the water. This means the submersible can help with research, while the people are a safe distance away.

Wow, I have found out lots of stuff about the Olympic Coast. I hope I will be able to see some of these things for myself while I am here.