To find out more about the marine life that can be found off the coast of South Africa Abby took me to see the Two Oceans Aquarium in Cape Town. Abby explained that South Africa has coasts on both the Atlantic Ocean and Indian Ocean.


Abby is an aquarist (a person who is responsible for looking after the aquarium and the animals they care for). 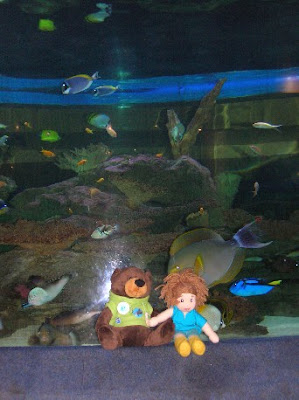 Inside of the entrance to the aquarium was a large aquarium tank. Filled with big beautiful colourful fish. Abby knew lots of things about the marine life in the aquarium. We caught up with Ruth who was feeding some of the animals and cleaning the aquariums.

Ruth turned on the lights for the jellyfish display. Jellyfish are transparent which means you can see through them. The special lighting makes them show up. 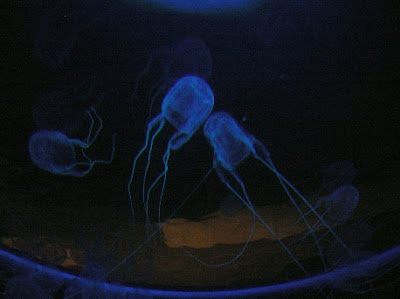 These are box jellyfish and are very dangerous. They have tentacles with stingers to catch their prey. These jellyfish are much more dangerous than most jellyfish and they can even kill a person. I am glad that I am safely this side of the glass. 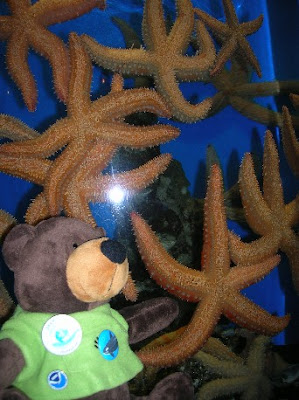 We moved along and came face to face with these starfish.

MORE PLASTIC POLLUTION PROBLEMS
The aquarium staff check every morning to see if there are any seals that need help. Many of the local seals end up with litter caught around their necks and the staff help to free them. The aquarium has even built a special platform where the seals can pull themselves out and sun themselves...and if they have litter around their necks or are hurt, they can be closed in with a gate and it makes it easier for the staff to help them. 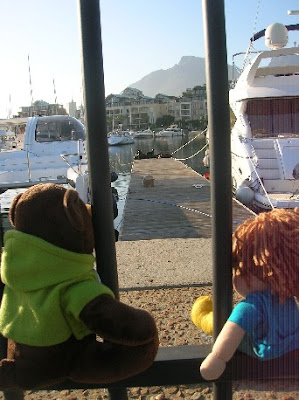 Unfortunately, this morning, the seals weren't on the special platform, but Vince went out to help them anyway. We watched from a distance. These are Cape fur seals. 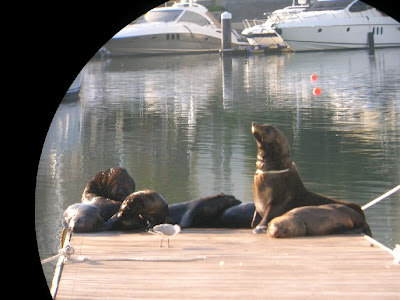 When they seals moved we could see with binoculars that 2 seals had plastic bands around their necks. Vince tried to catch the seals to remove the plastic but because they were not on the special platform they were too tricky to catch. Vince said he would try again later.
He said the seals are very playful and inquisitive and they play with the plastic but when they put their head through the plastic hoops the hoops get stuck and eventually the plastic would cause injury and even death of the seal.
When we got back inside Vince showed us a pile of plastic. 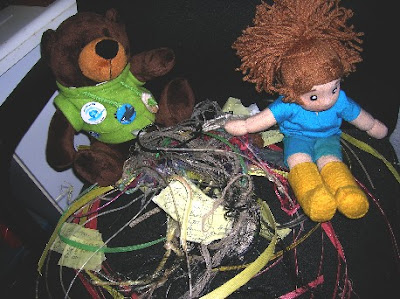 He said that that all this plastic was removed from seals in just one week. Both Abby and I thought this was terrible, imagine how big the pile would be at the end of the year!
You can find out more about the problem of seals and plastic entanglement below.
http://www.aquarium.co.za/blog/entry/catching_up_with_the_aquariums_seal_rescue_team/ 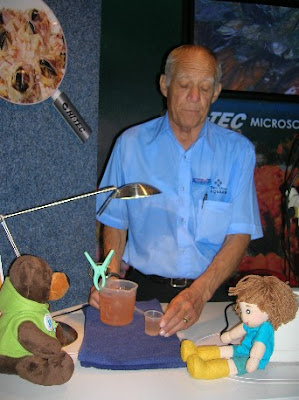 Dennis showed me some tiny plankton through the microscope. I explained to Dennis that I had helped NOAA studying plankton when I visited them in 2009.

I helped with the plankton sampling and also learned how climate change is causing the sea temperature to warm up which affects the plankton.

Dennis showed me how to use the microscope. I have used a small microscope before but this one was much bigger and more complex, 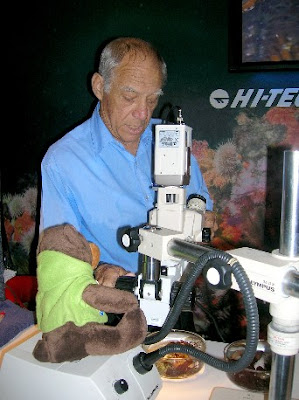 Dennis showed me lots of other things underneath the microscope which included barnacles and even some shark skin. Did you know they have tiny teeth on their skin called dermal denticles. They don’t use them to eat with but instead they are like a suit of armour and also help the shark to swim quickly and quietly.

More from my adventures in the aquarium in my next blog soon.

Ed the Bear and Abby
Posted by Steve Savage at 16:12