Today, Abby took me to visit a place called SANCCOB which means The Southern African Foundation for the Conservation of Coastal Birds. SANCCOB is a seabird rehabilitation centre where they look after injured and sick seabirds. 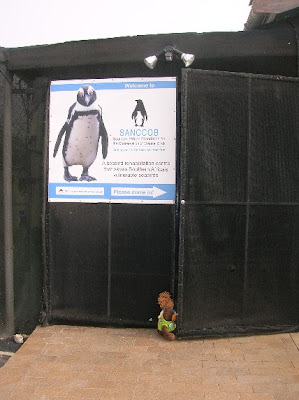 This is me and Abby arriving at SANCCOB where we were meet by a lady called Margaret who showed us around.

If the seabirds are well enough they are returned back to the ocean. Sometimes the bird is too ill or injured and would not be able to sure without help. When this happen the bird remains at SANCCOB so it can be cared for. More about that in a minute.

There are all sorts of sea birds here including cormorant, gulls and even penguins – yes penguins here in South Africa! I thought penguins only lived in places where there is ice and snow but Abby explained that wasn’t so. Some penguins also live and nest on the beach near here. 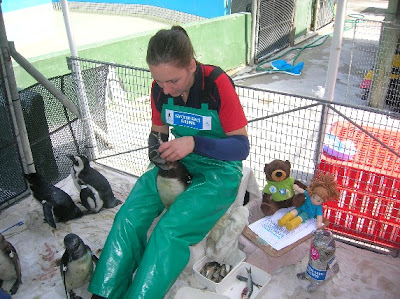 Margaret took us both on a special tour including places where visitors don't usually go. This is one of the volunteers  feeding some sick penguins.

We also met a gull that was brought in by a family who had hand-raised him and now he was too much for them to handle. Baby birds imprint on their parents, its how they know who they are and learn from their parents until they are old enough to look after themselves. 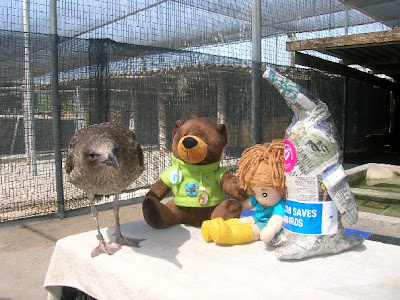 Unfortunately when  people hand rear birds the baby bird might imprints on them instead. This means if this bird were to be released into the wild it would be very confused about how to behave and how to get on with other gulls. It may also pester people knowing they are a source of food, which can be dangerous. This gull will have to stay at SANCCOB because he can't be released. Althought people are trying to help, when people find young birds they should take them to a special centre like SANCCOB where they can be looked after and not get imprinted on people. With luck, they will be released back into the wild one day.

Another volunteer, Jenny, allowed us to get up close during the feeding of "Home Pen". This is where they look after the birds that can't be released back into the wild. While people cannot go near the birds that the centre plans to release, these birds can be seen and help educate the public. People pay to go on the tours and this helps to pay for the running of the centre. 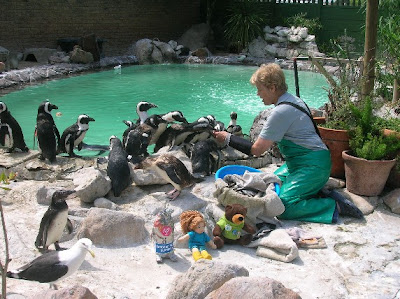 Here, Jenny is feeding Baby, a cormorant, who is also a resident in home pen. 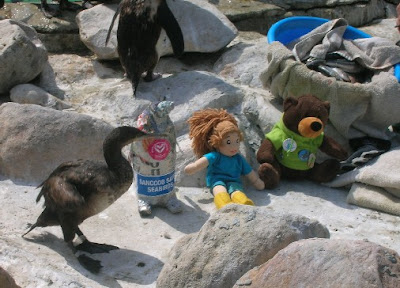 Later Nola, the vet at SANCCOB, invited us to look at some blood samples from the penguins under the microscope. 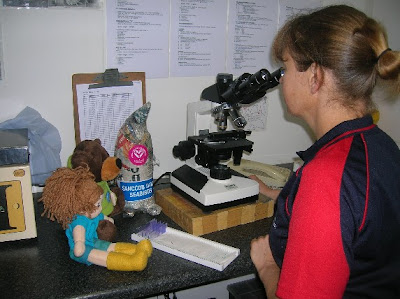 They check the penguins' blood every week to check on their progress to make sure they're getting better. This is one way of making sure when they can release them back into the wild as soon as possible.

Margaret said that there was a terrible oil spill in 2000 when an iron ore tanker MV Treasure sank between Robben Island and Dassen Island. It released 1,300 tons of fuel oil and thousands of sea birds were polluted by the oil. SANCCOB played a big part in the rescue, cleaning and releasing of many marine birds. Great job! It must have been a terrible sight.

A big thank you to eevryone who showed me around and letting us get close up to many of the birds.
Abby said she would take me to Boulder beach were a large colony of penguins live and nest. 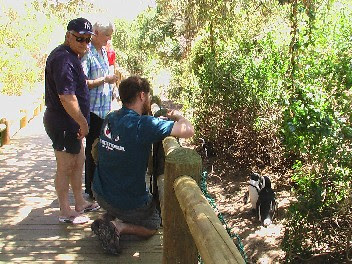 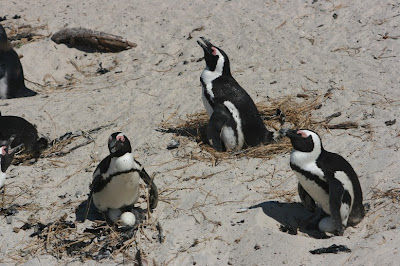 These African Penguins make their nests on the beach or in old burrows. 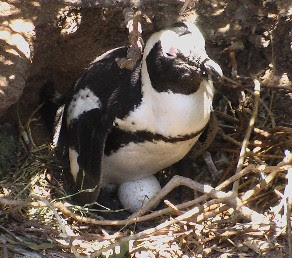 Both parents take it in turns sitting on their two eggs and it takes about 40 days until they hatch.

I loved seeing the penguins

You can find out more about the great work they do at SANCCOB by visiting their website at http://www.sanccob.co.za/?m=1

We have had such a busy and exciting day.

See you all soon

Bye for now
Ed the Bear and Abby
Posted by Steve Savage at 08:25