On our last day in Antarctica we  sailed into Fornier Bay on a completely flat sea. We thought the scenery could not be any more spectacular. The water colour was an unbelievable shade of purple and the water visibility was crystal clear which gave us a different view of the hundreds of icebergs that floated around us. 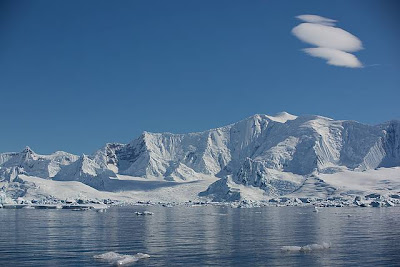 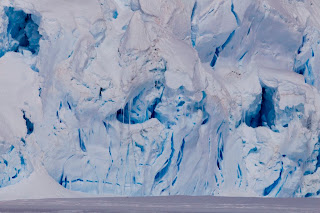 The inflatable zodiacs were launched for a final cruise around the icebergs and the great conditions meant we could get within touching distance of them. We really got to have a great look at the many bridges and holes that make up detailed parts of the icebergs … and the all the different colours of blue that are so unique to the ice bergs.
We also used this zodiac cruise to search for seals on the ice floes. 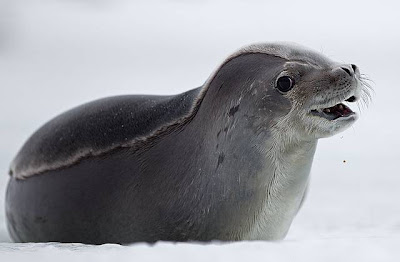 The first seal we spotted was a crab eater seal and again in the great conditions the zodiac could rest right against the piece of ice he was resting on, which gave us a great view. We then spotted the next seal about a hundred meters away … a large Weddell seal ….
And then as we left the weddell seal we came across an Antarctic Minke whale that was cruising through the ice. It was very relaxed so we were able to get really close to it. It was beautiful to watch as it cruised peacefully amongst the ice on a perfect flat and quite sea, and at the same time we could listen to the sound of its exhalation echoing around us each time it came to the surface to breathe.


Monique suddenly pointed out a shape on the ice. It was leopard seal and we moved in closer. 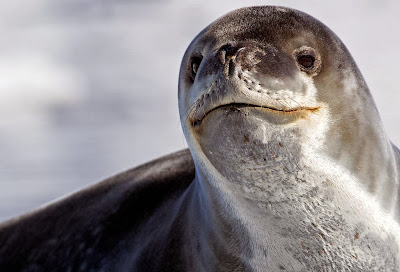 Unlike the other seals we had seen this one did not look very cuddly in fact its head and neck looked more like a big snake such as an anaconda! It moves is fairly slippery as it snakes in and out of the water.
It was a bit sad to find out that leopard seals eat penguins, but I remembered that Monique had explained to me before how important apex predators are. Just like the great white sharks, the leopard seals help to keep the other animals in Antarctica in balance - even the penguins.
Posted by Steve Savage at 08:01