Today I realised just how valuable freshwater is. I guess we are all so used to just turning on the tap and we have as much water as we need. This water is purified for people to be able to drink. In Tenerife there are no permanent running water like the River Adur back home.
Most of the fresh water comes from the heart of the volcano - Teide where melting snow has filtered through the rock. I didn’t even know that it ever snowed on Tenerife - it seems so hot. Steve said that Teide is so high that it snows on the peak of Teide in the winter. There are pipes that supply water that is suitable for drinking but not all water is pure enough for people to drink. I thought volcanoes were full of hot molten larva but Steve told me that the water can build up in special porous rocks called an aquifer. Pipes can be seen taking water around the island. 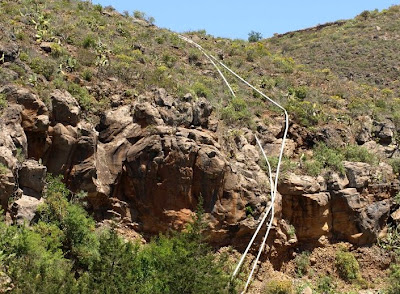 About 400 years ago there were many springs, streams and waterfalls on Tenerife. In recent years a big increase in tourism has meant more water has been extracted from the aquifer to provide for tourists and now there are virtually no streams or waterfalls on Tenerife that do not run dry during Summer.
There are a few places on the island where local people can fill their plastic bottles with drinking water for free. That’s exactly what we did today. I headed off up the mountains with Xena and Sharon to collect drinking water that would last for a couple of weeks. 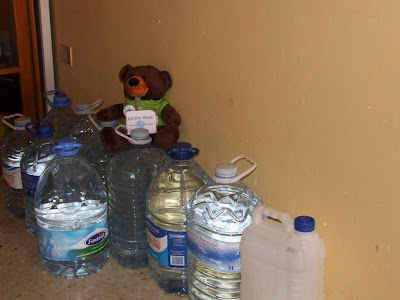 It really made me think about how valuable water is – with out water there would be no like on earth. How luck I am to live in a country where water is plentiful, even during very hot weather when water is less plentiful, we still have plenty to drink. But I can’t help wondering if global warming might change all that. Back in the UK water is often wasted. Some people even leave the tap running while they clean their teeth.
After breakfast - brunch we went for a walk along the coast behind Alcala village. 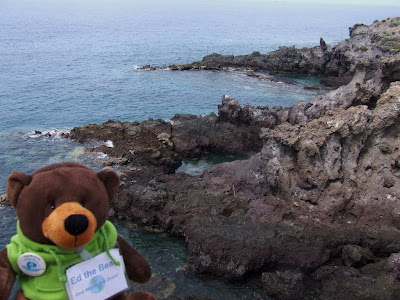 Xena once lived in Alcala. When Steve and Sharon stayed with Xena the village was much smaller and quieter. We had a leisurely walk, lunar came to. We found some unusual shaped seats which although made from concrete, they were very comfortable. We carried on walking, but it was soon very hot so we sheltered beneath some palm trees. I soon got fidgety and started climbing the palm trees. TheIr bark makes it very easy to get a handhold. 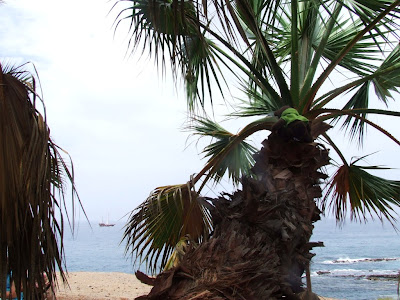 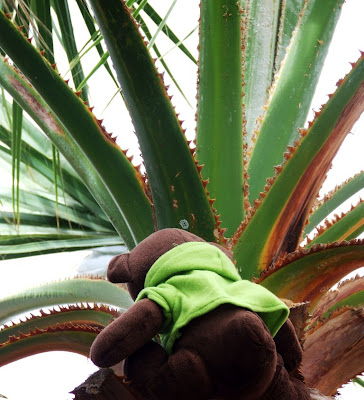 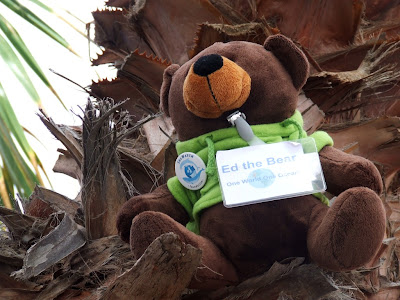 I looked out to sea and watched a pirate ship pass by. Luckily it was a replica, full of tourists, not the real thing. We walked a little further and then went back to Xena’s house for ice cream and siesta. 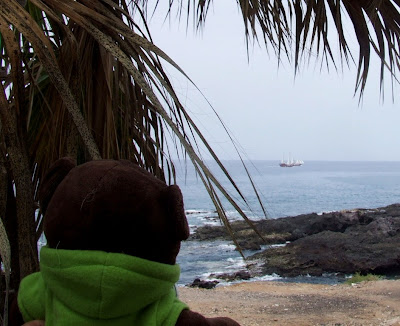 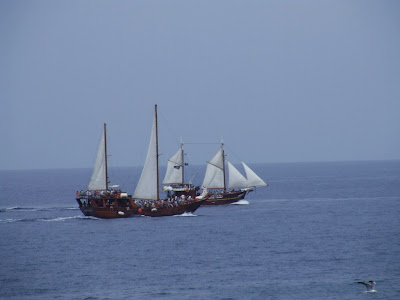 Xena teaches Yoga several times a week and she was teaching a lesson today. I asked if I could go with her to watch as I had never done any yoga before. When we got there I was feeling a bit shy, so although Xena invited me to take part, I said I would watch. Xena has a small group of regular students who seemed a nice cheery bunch. The ladies who had come along seemed to have a lot of fun, but it also looked hard work, especially in this hot weather.
When the class had finished, Xena said she would show me some of the Yoga positions. My tummy kept getting in the way (a bit like my buddy Steve - don't tell him I said that) so Xena helped me get into some of the positions. 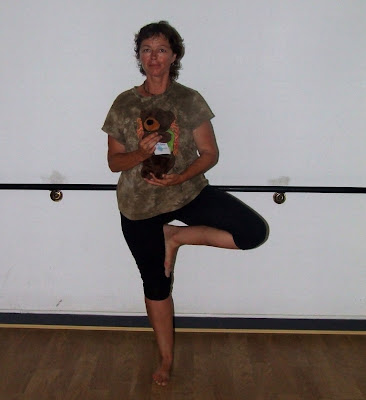 This position is called "Sun Salutation" 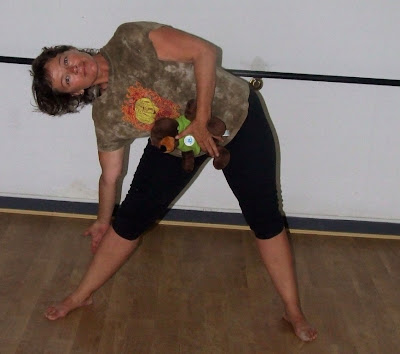 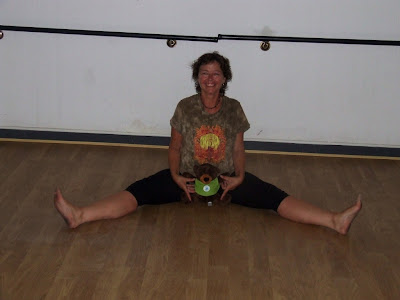 In the end I managed to do a few on my own. 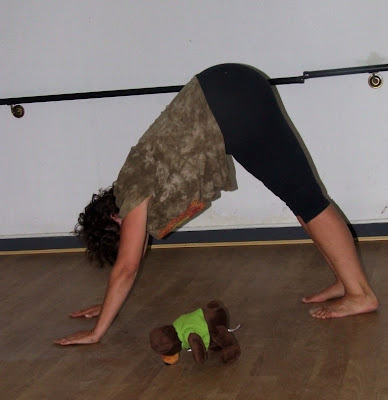 This position is called "Downward Dog"
That evening it was card night, Xena and a small group of friends get together every Thursday. They take it in turns to host the evening. One of the players, Neville, helps run the Los Gigantes Dive Centre. Steve also knows Neville from previous trips to Tenerife. Neville said it was a shame that I had not brought my dive bubble he would have taken me out to sea the stingrays which they hand feed. That would have been very exciting!
Soon they were ready to play cards. I didn't want to get in the way so I made my excuses and went off to bed. 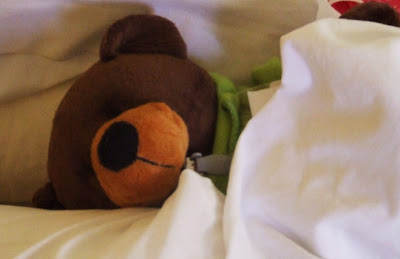