We all woke refreshed and headed off to a small seaside village called Los Gigantes, named after spectacular sea cliffs. The cliffs are one of my buddy Steve's favourite views on the island. Xena helps out with one of the whale and dolphin watch boats moored in the harbour at Los Gigantes. Xena was working today. She dropped us off in the town and said she would meet us later. I was really excited as Steve said we would all be going out on the glass bottom boat to see dolphins and pilot whales. I have not seen pilot whales before so I was really looking forward to this. We met up with Xena and we were soon settled down and ready to go. 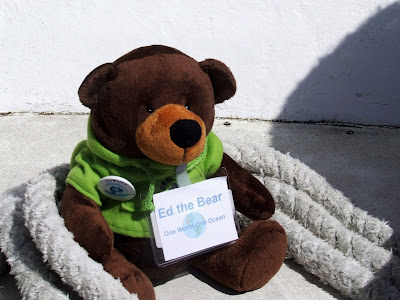 I found somewhere out of the way while they readied the boat and we were soon on our way. 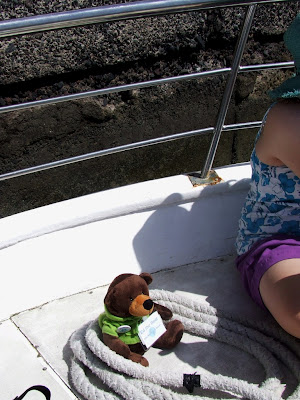 As we headed out to sea, waves broke against the bow spraying us with sea water. I was disappointed however to see some marine litter floating past, including a white plastic bag. As we continued on we all got wetter and wetter, but was a hot day and it helped to keep us cool. I looked towards the shore. 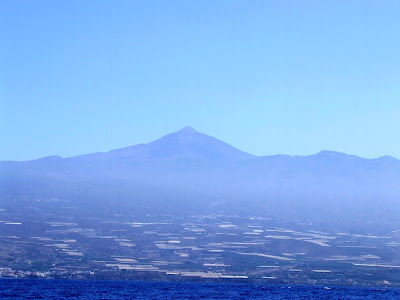 Towering above the island was Teide – it looked spectacular.
Steve pointed out a bird skimming low over the waves. He told me it was a Cory’s Shearwater. 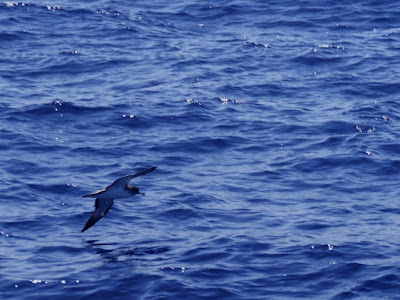 Steve said they feed and catch food for their young out at sea and return to the nest at night. The adults call to their chicks – which sounds like cackling witches.
All of a sudden two pilot whales surfaced on the left side of the boat. The boat captain slowed the boat being careful not to get too close when suddenly two whales surfaced right next to the boat. 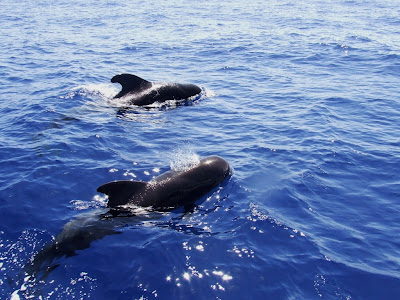 These whales were amazing to see. After taking a breath they dived, but the water was very clear and you could see them swimming beneath the water. 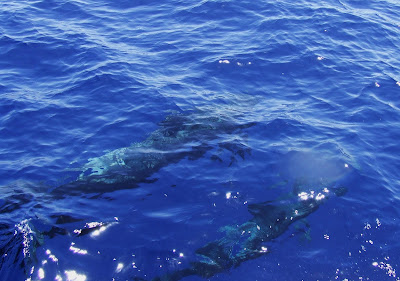 The whales surfaced, swam alongside the boat and then dived again. There were several other pilot whales a short way off. 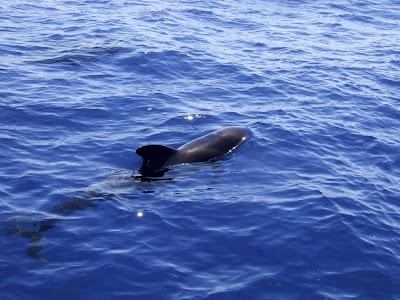 The pilot whales were beautiful and graceful. It was a privilege to see them close up. 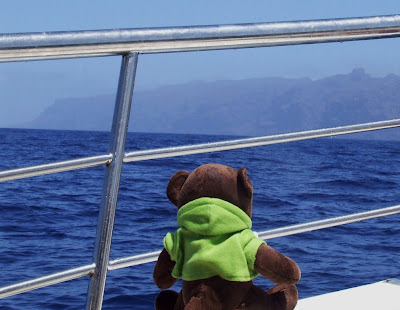 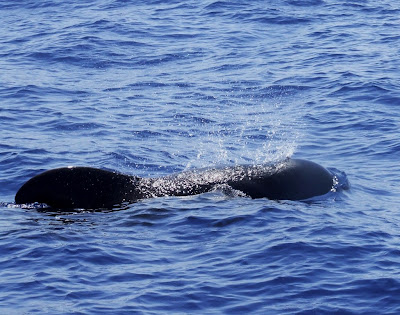 A large whale swam past, and spouted as it breathed out before taking in fresh air before diving again
After we had enjoyed watching the whales for a while, we slowly turned and headed back towards the shore. However the tour wasn’t over yet. We were heading for a bay called Masca where we would anchor and people could get of the boat and swim. 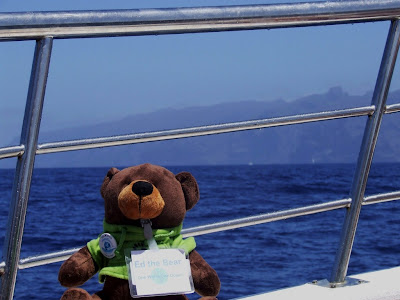 On the way we eat Tortilla (Spanish omelet) and drank Sangria. I watched the dark line of cliffs in the distance get higher as we got closer. 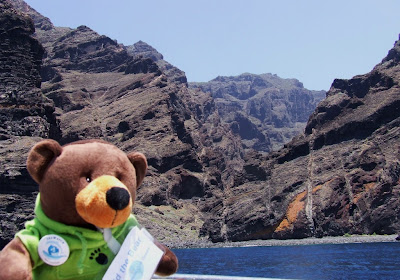 Soon the cliffs were towering above the boat and made me feel very tiny. Sharon and Amber went for a swim but I stayed on the boat with Steve. The water here was very deep and I did not have my diving bubble. 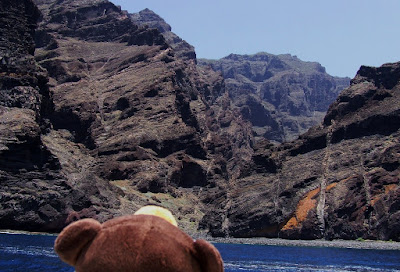 I sat and admitted the view of these stunning cliffs.
When everyone was back on board he headed back to the marina. On the way back we stopped at some fish farm where they farm two species of local fish for the restaurants on the island. 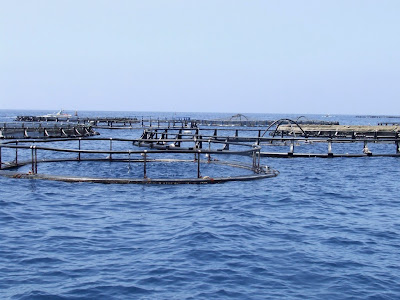 I thought this was a great idea, farming fish instead of catching from the wild – because many fish species have been over fished. However, my buddy Steve told me that the fish farms can be harmful. He said that a lot of fish waste in one area and uneaten food can be a big problem as it upsets the water chemistry. A diver buddy of Steve’s had told him that the area around the fish farms has become polluted and not much lives their now.
Steve was about to say something else when I interrupted him. I had seen a dolphin surface next to one of the enclosures. I pointed excitedly to the dolphin but Steve seemed less pleased. 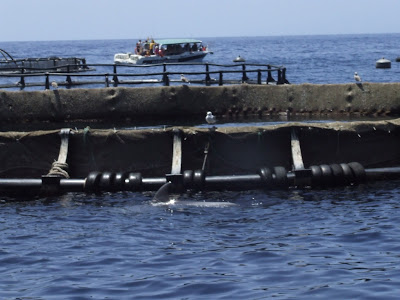 This is another reason the boats stop here – to see the dolphins. Steve told me the dolphins were attracted by the fish. When the fish farms were first set up, the dolphin learned to leap into the enclosures to catch the fish. 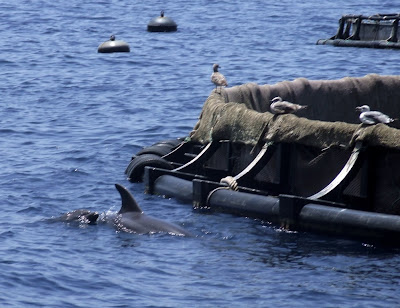 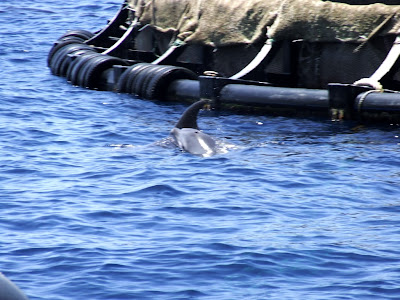 Now the dolphins swim round and round the fish farm continuously and the fish get very stressed at these large predators being so close.
Steve said that when he had visited in previous years the boats had to head out to see to find the dolphins, just like we had done to see the pilot whales. When the boat reached the dolphins they were often inquisitive and playful. They would swim over to the boat, leaping and splashing or riding the bow wave at the front of the boat. Even I could see that the dolphins had no interest in us being there. 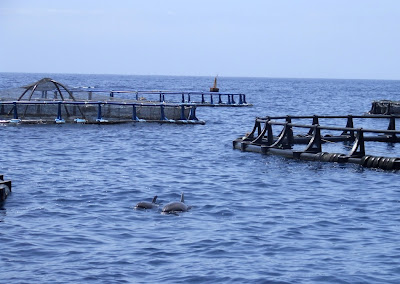 They just swam round and round, even a mother dolphin with a calf. I felt sad for these dolphins and how their live had changed. I was glad when the boat turned and headed off to the marina.
When the trip was over we went back to Xena’s house. I had a shower to get the salt out of my fur. We had a meal and then slept. But the day wasn’t over yet. It was a local Fiesta (festival) at Alcala and tonight there would be a big fire work display. Xena drove us up the mountain a short way, over looking the village of Alcala and watched a breath taking firework display. 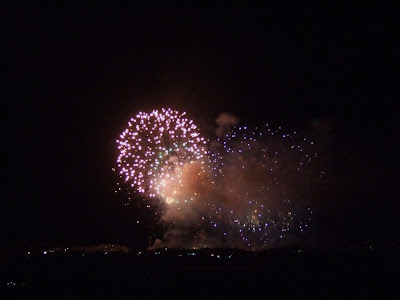 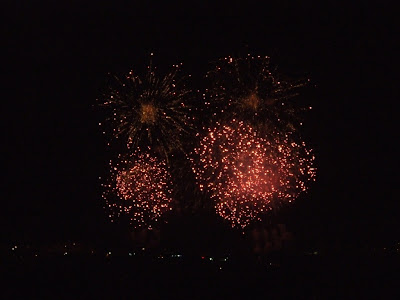