Making friends with dolphins at the Dolphin Research Center


Sam and I are winding down our trip to the Florida Keys National Marine Sanctuary. One of the more popular marine animals here in the Keys is the Atlantic Bottlenose Dolphin. Some dolphins visit the Keys as they pass through the area foraging for fish. Others live in the Keys all year-round. In fact, one of the more popular trips for tourists in Key West is “Dolphin Tours” where people can go out on a boat to view dolphins in their natural wild habitat.
I have been told that in the United States, there is a law called the Marine Mammal Protection Act which makes rules such as how close people are allowed to get to animals like dolphins and sea lions so that they do not disturb the animals or change their natural behavior. This is a great idea. We have sea mammals back home as well which I have seen from my local beach. We have bottlenose dolphins and common (harbour) seals – but no sea lions. http://adventuresofedthebear.blogspot.com/search/label/bottlenose%20dolphin

The Florida Keys National Marine Sanctuary has a program called Dolphin-Smart which salutes Dolphin Tour Operators who agree to follow these laws and to be respectful about how they approach animals in the wild. Since we hadn’t yet seen any dolphins in the wild, but wanted to learn more, we decided to take a visit to the Dolphin Research Center in Grassy Key. The Dolphin Research Center (DRC) is a not-for-profit education and research facility, home to a family of Atlantic bottlenose dolphins and California sea lions. 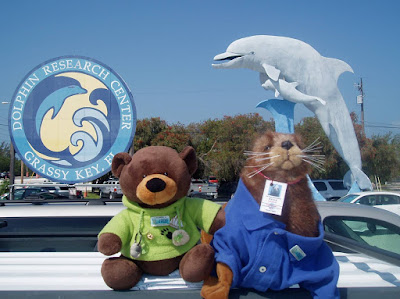 I found out that they have many educational programs which are open to public. For decades, DRC operated as a member of the Marine Mammal Stranding Network and rescued and rehabilitated many whales and dolphins. The rescue and rehabilitation events provided invaluable opportunities for important research and data collection. DRC extended its rescue commitment to include the endangered manatee and is currently the only facility in the Florida Keys licensed by the Federal Government to assist manatees in distress. My buddy Steve in the UK studies the dolphins and seals around my local coast as part of an organisation called the Sea Watch Foundation. www.seawatchfoundation.org.uk 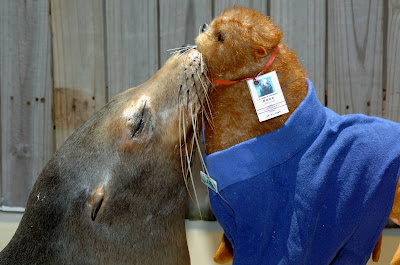 Sanctuary Sam’s fellow California Sea Lion was happy to see a familiar face so far from home and offered a warm greeting by way of a big wet kiss!


One of the resident dolphins, “Tanner”, explains to Sam and I how important it is to recycle. 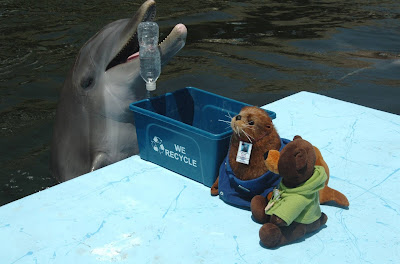 We had already learned about the many problems marine debris is causing in our oceans, and how important it is to properly dispose of our trash. I told Tanner that I had been learning a lot about marine litter and that last Christmas I returned to the UK for a few days to tell everybody to make sure they recycled all the Christmas wrappings and extra packaging and bottles that people use at Christmas. (See my earlier blog entries for 23rd and 24th December 2009). I was even in the newspaper!
Our new dolphin friend also explained that over two million plastic bottles are used in the U.S. every five minutes! Wow! That’s a lot of bottles. To help reduce this impact on our oceans, he suggested re-useable stainless steel water bottles filled at home for free as a good alternative. 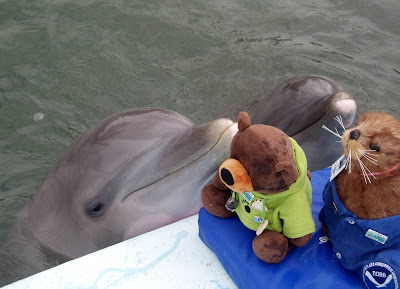 Here we are chatting up two more of our new friends. They even asked us if we would like to take part in their next public demonstration. 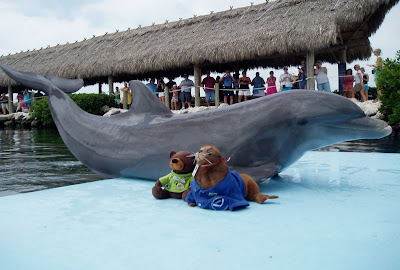 Our 15 minutes of fame at the Dolphin Research Center! “Pax” generously shared the stage with Sam and I. “Pax” is 13 years old. Scientists believe that dolphins live an average of 25 years or more in AMMPA accredited facilities such as DRC. Many of their dolphins are living much longer due to the fabulous husbandry care they receive (30’s, 40’s, 50’s). The oldest dolphin is “Theresa”. She is in her mid to late 50’s. Dolphins in the wild have much tougher lives so their average life span appears to be shorter, however they also are occasionally observed to live into their 40’s and 50’s. (Females tend to outlive males.) 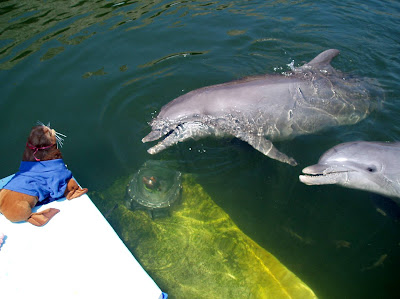 That’s me in my submersible! It was a great day and we learned a lot about these very intelligent animals. Thanks for showing us around! “Kibby” has asked me to share her message of not swimming or playing with wild dolphins. She said wild dolphins are not used to people like she is and that it can scare them and stop them feeding and other things that dolphins do. She also said that if people do want to meet a dolphin up close they should only do so at an approved educational facility. If you want to know more about these dolphins and the research centre you can find out more at the following website http://www.dolphins.org/

Wow that really was very exciting getting so close to those dolphins and even taking part in a demonstration in front of people.