Hi everyone
Our next stop was on the island of Marathon. This island is about half way between Key Largo and Key West. We came here to meet Richie Moretti, the founder of the Marathon Turtle Hospital. Sadly, we learned that all eight species of sea turtles in the entire world are threatened or endangered. This is mostly due to habitat destruction caused by human development of coastal areas. 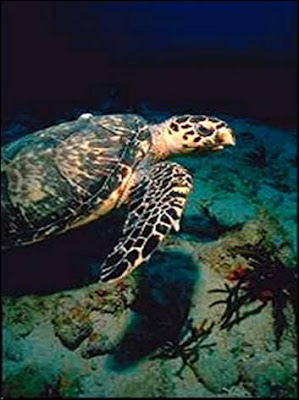 In fact, Richie told us that over 30% of all endangered species in Florida call the coral reef ecosystem of the Florida Keys National Marine Sanctuary home. These include manatees, queen conch, sea turtles, and Bahama Sea Stars. Although they spend much of the time in the ocean, female sea turtles return to land to lay their eggs. You may remember I found out about green turtles in the Hawaiian Islands back in March. These eggs are laid just above the high tide line on the same beach on which they themselves were born. The baby turtles hatch in the late spring and dig their way out of the sand during a full moon. They follow the light of the moon towards the sea, and swim away.

Unfortunately, many of these tiny turtles are eaten as soon as they enter the water. The ones that do survive to grow older have plenty of problems of their own. Entanglement in fishing nets, traps, and line can cause drowning or amputation. Floating marine debris like plastic bags can be mistaken for one of their favorite foods, jellyfish. When they eat plastic or other marine debris they cannot digest it and may starve to death or get sick.

Turtles can hold their breath a long time but do not have gills like fish. This means they have to come to the surface of the water to breathe. Sometimes, boaters accidentally run them over when they come up in front of a moving boat to catch a breath. Even with their hard shell, this often causes severe injury or death.

Richie Moretti founded the turtle hospital to help injured or sick turtles get better and then release them back into the wild once they are healthy. The Turtle Hospital has successfully treated and released over 1000 Sea Turtles since its founding in 1986. The Turtle Hospital was opened in 1986 with four main goals: 1) rehab injured sea turtles and return them to the wild, 2) educate the public through outreach programs to local schools, 3) conduct and assist with research which aids the sea turtles (in conjunction with state universities), and 4) work toward environmental legislation which makes the beaches and water safe and clean for sea turtles. 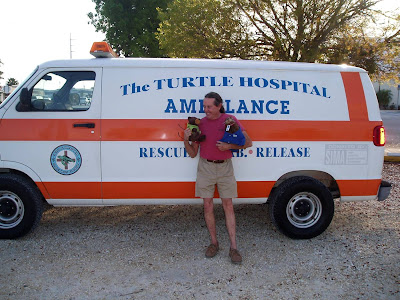 Of course, no hospital comes without an ambulance! Richie showed us the Turtle Hospital Ambulance that he uses to pick up sick and injured turtles that get brought to shore by volunteers or concerned boaters.

This picture of Sam and I was taken with Richie and Scooter the Loggerhead Turtle. Richie told us that Scooter was rescued as a weak and hungry baby about the size of a ping pong ball. He is now 3 years old, and is the official education turtle of the hospital. He likes his job and his home at the hospital, but in about 2 years, when he is big enough, he will be released back into the wild. Scooter has his own web page on the Turtle Hospital website if you would like to learn more and follow his progress.

I will certainly be checking from time to time.
Bye for now, Ed, Sam and Scooter
Posted by Steve Savage at 15:18