Diving with the fishes

Me and Sam are still here at the Florida Keys National Marine Sanctuary! Sanctuary Sam and I have been learning so much and having such a great time here. We recently learned that Sanctuary staff host field trips with local students to visit and learn about the coral reef eco-system first hand. It just so happens that while we were in town, students from Sugarloaf Middle School were going on one of these “Coral Reef Classroom” trips, and Sam and I were invited to go along! I was extra excited to find out that I would get a chance to explore underwater in my diving bubble.

These trips allow students to learn about their local marine environment in a real-life classroom; the ocean itself! We gathered at one of the local dive shops and boarded the vessel “Pegasus” for our trip to Looe Key Reef. We learned that this is one of the Sanctuary Preservation Areas; (SPA) a section of the reef which has been set aside for extra protection.


In these “SPA” areas, fishing is not allowed, meaning that fish in these areas are allowed to grow bigger and do not have to fear the humans who come to these areas to dive and snorkel. These areas also have a system of mooring buoys anchored to the sea floor which visiting boats can tie up to so that they do not have to drop their anchors on the coral, which would damage the fragile corals. 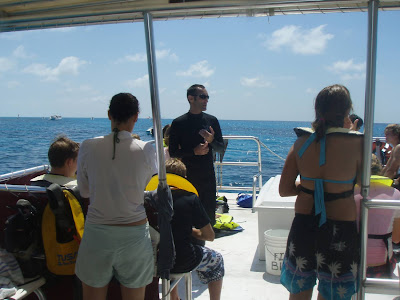 In fact, Sanctuary regulations do not allow boats to anchor on coral anywhere within its boundaries. In this photo, Sanctuary Education Staff member Todd Hitchins tells the students about some of the scientific equipment scientists use to measure ocean conditions such as salinity (how much salt is in the water), and turbidity (how clear the water is). It was quite technical but Todd explained things really well. 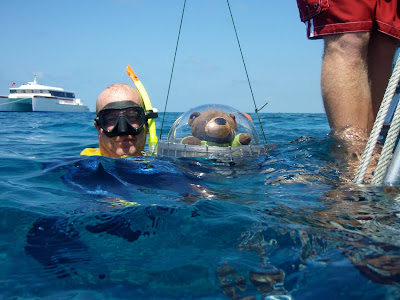 Going down! Staff member Robert Keeley gets my submersible ready to go underwater so I can get a close-up look at the coral reef. 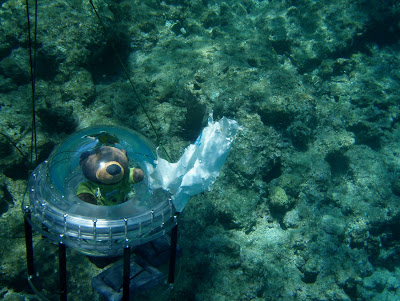 Uh oh! As soon as I descended, an old plastic bag floated by the sub. Todd had mentioned earlier that an estimated 6 million pounds of marine debris enters the ocean each year. Most of this trash comes from people littering or not disposing of their garbage properly. Marine debris causes many problems for marine creatures, which I have seen on my travels. Animals can become entangled in discarded fishing line or mistake plastic bags or particles for food and become unable to eat. Larger trash can scour sensitive bottom habitat or break off pieces of coral. Thankfully, one of the students got this bag out of the ocean and disposed of it properly back on shore. 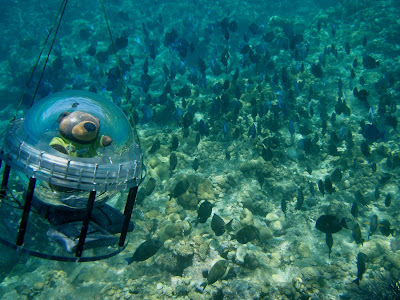 Here I am with a beautiful school of Blue Tangs. It seemed like there was hundreds of them. Tangs are a member of the surgeon fish family. I didn’t see any of them operating though; I don’t know why they call them surgeon fish. Maybe you can tell me! Blue tangs feed mainly on algae. 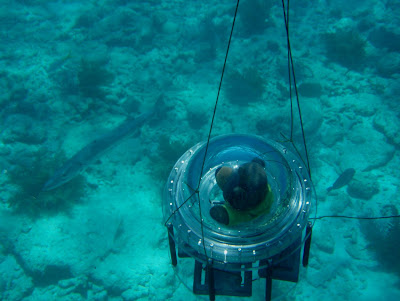 My, what big teeth you have! This large barracuda swam by for a closer look. I hope he doesn’t think I look like dinner. Later Todd explained to me that these large predatory fish are known as ambush predators. They look as though they are just floating in the water on the edge of the reef, but when an unwary fish is not paying attention, they are one of the fastest fish in the sea and can strike suddenly from seemingly out of nowhere. They are very curious and not afraid to come close to people. 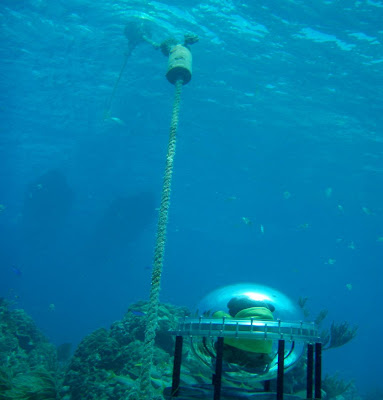 This is one of the mooring buoys which is attached to the bottom of many of the popular diving and snorkeling spots in the Florida Keys National Marine Sanctuary. These are the ones I mentioned earlier which stop boats anchoring on the fragile coral reef. This type of system has now been used in many other parts of the world since it was developed here in the Florida Keys. Its good to know these special anchoring buoys are helping top protect reefs in other countries as well. 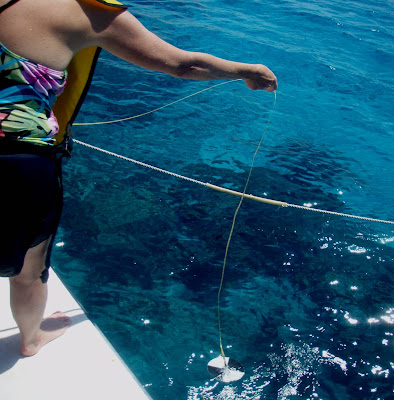 This is one of the students measuring turbidity with a tool called the Secchi Disk. There are marks on the rope that tell you how far down you have dropped the disk. When you cannot see the disk anymore, you record how many meters of line you have let out. This tells you how much visibility there is in the water that day (how clear the water is).

We had a great time on Coral Reef Classroom! There are so many fish and other creatures on the reef. It was very beautiful. I hope we can get in the water again before we leave!

Oh yes. Todd explained why they are called surgeon fish. This is because they have hard spines at the base of their tail which looks like a surgeons scalpel (the instrument they use when operating. If a surgeon fish is threatened or attacked, it will flip its tail and the spines pop out like small knives. I'm glad I did not upset them, even by accident!

Sam and I are rather hungry after that wonderful adventure. Bye for now, Ed and Sam
Posted by Steve Savage at 16:21