Fred the monkey and myself were again helping to clean the beach. It was hard work and so we sat down to have a rest. As we sat we talked about the albatross and then Fred gave me a folded piece of paper with a list written on it. Fred told me to read the list and to guess how many of the plastic items might contribute to the death of an albatross.

After having a hard look at the list and thinking about which items might be eaten by albatross chicks I chose the following items for my list.

Fred said I had made a good list. Try making a list yourself. How many do you think I got right?

We spoke more about the beautiful albatross and their ocean wanderings. They really are amazing birds. I asked Fred how many on list I had gotten right and he said all of them. I was feeling quite pleased with myself. Then Fred suggested we should get back to cleaning the beach. 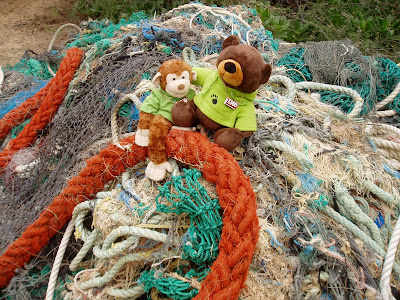 These nets were too heavy for a monkey and a bear, so we got help from some locals who carried them away. Although the beaches had lots of litter, Ron told us that this was much better than in others years because the local people had been working really hard to tackle the marine litter problem.

When we had finished we had collected a lot of plastic items. I said to Fred that at least the plastic litter we had collected wouldn't be harming any more albatross or other marine life. Fred asked me to remember the items on he list he had shown me. He said I had done well with my list but actually all the items in his list can contribute to the death of albatross. The adult albatross pick up food items from the surface of the sea to feed their chicks, but they also collect plastic litter without realizing. The items that are found most to have killed albatross chicks are plastic bottle caps and disposable lighters. There are also many unidetified pieces of plastic found inside the dead albatross chicks. And of course, this litter also kills many other marine animals as well. Fred said, this made him very sad.. I agreed.

Fred said that he was glad that I had visited with him and that he hoped I would take his message back to the UK, which I said I would.
The Hawaiin people have a very powerful word we should all remember, "Kuleana" which means "responsibility". We all need to clean our teeth, and plastic bricks and plastic animals are fun to play with but when we don't want them anymore we have Kuleana to make sure they are recycled or disposed of safely.