Ed finds out about the Laysan Albatross

I have had lots of fun on the island but my stay is tinged with sadness. One of my reasons for coming to Kauai, apart from meeting Fred and Ron, was to find out more about the tragic deaths of hundreds of Laysan Albatross. You may remember Fred gave me a leg band from an Albatross chick to wear, like the one he wears, in memorial of the death of albatross chicks in Hawaii. 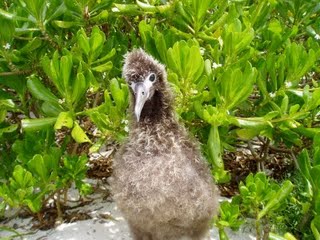 We travelled to Kiluaea National Wildlife Refuge to see albatross, but they had not arrived yet. We did see some friends of Fred, red footed boobies who he met out on Pihemanu. Some were at Kiluaea along with Nene, some shearwaters, and some tropicbirds too. Fred told me that Laysan Albatrosses nest on Kauai and on other small islands in the North West Hawaiian Island chain. They are not present on other big islands because of the dogs, cats and mongoose that have been introduced to the island. Luckily there are no mongoose on Kauai, (which eat birds eggs) so albatrosses can nest along the northeastern shores like by Larson's Beach and even around where people live and play golf at Princeville. A lad we spoke to said if you want to see an albatross up close, visit Princeville after 16th November.

Fred told me more about the Albatross. Firstly each pair only lay one egg and raise one chick. Scientists have been studying the Albatross because we know very little about them because they spend most of their life soaring above the waves. 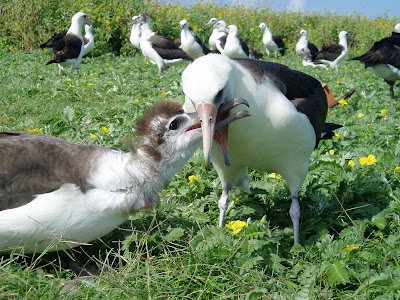 I wondered why plastic was such a problem as it certainly did not look very appertising to me. Fred explained that the albatrosses die from plastic litter because they feed by landing on the water and picking at stuff. They look for squid and they search too for flying fish eggs. Fred told me that the eggs often stick to things like netting and pieces of fishing line. So, the birds snatch floating egg masses and any plastic object that is about the size of a squid (brush, lighter, toothbrush, bottle cap, lego, toy soldier, fragment of plastic bucket, etc) and fly on back to the babies and feed it to them.

The adult Laysan Albatross might fly roundtrip over a thousand miles on any one of its weekly trips away from the nesting island. The young albatross die when plastic tears the wall of the stomach or they die when they are not able to cough up the bolus (pellet) that naturally forms in their stomach to get rid of bones or other hard parts of their food like the beaks of squid. This is their one chance of getting rid of the plastic they have swallowed too. The young birds eject one bolus before attempting to fledge. If they are unable to do this, they die from starvation since the plastic fills the stomach to capacity. This made me feel really sad and we sat there for a while not saying anything.

We went back to look for Albatross again, but they still had not arrived. 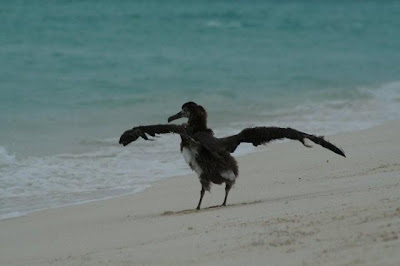 
This is a Laysan Albatross that Fred got to know more personally than any others. Fred said there are about a million albatross on Pihemanu. The little ones stay in the same place for about six months prior to attempts at fledging, so it is easy to get to know birds. This young one is testing the wind and its wings. The birds fledge by entering the water of the lagoon. They swim out to the edge of the atoll then fly off.

Fred said he would show me the Hala Hala plant which is a native Hawaiian plant. Shearwaters often nest here, hiding their baby and themselves from any harm within the stiff tent-like structure at the base of the plant. It also makes a good sun shade for them to shelter from the hot sun as well.

Fred said that much of the lowland vegetation in the main Hawaiian Islands is non-native. Native plants are gone from the lowlands and those in higher elevation rainforest are often threatened or endangered. More species of plants and animals are on the endangered list in Hawaii than all the other 49 states of the US combined. This is a huge amount when you think how big the other states are. We hear a lot about Hawaii back in England, but mainly about how it is such a friendly place and how beautiful it is. It’s rather shocking to hear how much trouble the island's plants and wildlife are in. 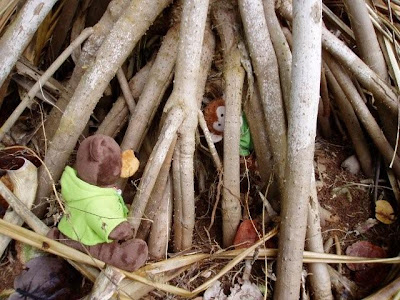 Our search for shearwaters in the Hala Hala plant turned into a game of hide and seek.

Later we discussed the problem of extinction further. Fred's buddy Ron says that islands are particularly vulnerable to introduced species as the animals that live there have no defense against them. Being a small island they can’t more far away to avoid the dangers either. Like other islands, species here become extinct and endangered because of introduced species (ground nesting birds are disappearing because of introduced rats and pigs. The local plants and wildlife also find it difficult to compete with these introduced species as they often have no natural predators here. Surf boards here were originally made from the spongy wood of the wili wili. 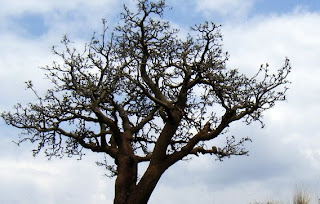 In earlier times, Fred would have gotten to surf on boards made from the spongy wood of the wili wili. but there are few wili wili trees around. But Fred now refuses to surf on any plastic board and is awaiting his very own traditional Alaia board, being shaped for him by an Australian surfer and board maker!