Its time to leave Kauai and go back to Marrowstone Island with Fred and Ron. I have had a great time on this most beautiful of Islands with its friendly people with such great hearts.I hope I will get a chance to return again sometime. I have learned so much during my stay here.

As well as learning about the Hawaiian culture I have also learned some Hawaiian words.

Here are a few.
One of the first words I learned was Kuleana, meaning responsibility. The word for Oceans is Kai. These two words together have great meaning for the Hawaiian people, for Fred and now for me also.

Malama i ke kai means to “care for or protect the ocean,” a very important Hawaiian value that dates back over centuries. I hope the children back in the UK will have the opportunity to learn about the respect the Hawaiian people have for the oceans.

Even though the oceans and land seem very seperate they are linked together in many ways, such as the water cycle. The oceans also control our climate. So I have also learned this sentence as well Malama i ke kai ame ka 'aina  which means "protect the ocean and land"

These are also words that I have learned from the Hawaiin people that are also an important part of the Hawaiian culture.

Hawaiin words are pronounced differently too, not easy for a bear to get the hang of.  Here are the vowels and how they should be pronounced.

A is pronounced “ah”

I is pronounced “ee”

U is pronounced “oo”

W in the Hawaiian language sounds like the letter “V” in the English language.

Fred taught me some words too. Us bears are always hungry so I also carried a pupu (snack) with me. Fred gave me a lei (neclace) that you can see me wearing in memory of Fred's albatross friends who never got to soar because they died from being fed litter. Lei can also be the traditional neclace of flowers, shells, or feathers worn and given all through the year for many reasons. 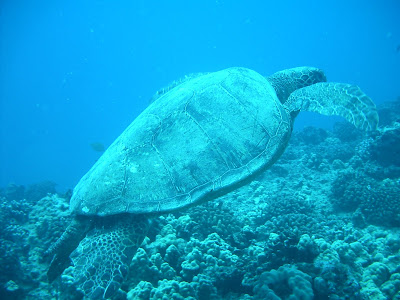 I have had some great experiences and memories of Kauai which I will take with me, made all the more special by having Fred's friendship and his local knowledge. Sadly, I have also learned how fragile the island plants, animals and ocean life are and how much help they need. The Hawaiian people are working really hard to protect their islands and surrounding oceans, but many of these problems are global ones. There is only one world and we are all linked together by one ocean.
Aloha, Ed
Posted by Steve Savage at 07:42