Today I saw 2 monk seals. They are similar to the common seals we have back home in the UK, but these seals are a bit bigger. Fred’s buddy Ron took a photograph of this monk seal when walking along the beach. It just came out of the water and plonked itself down onto the beach near where Ron was walking, 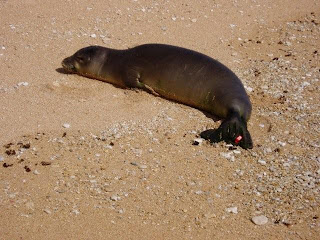 You may remember I told you about the common seals back home and how their population had dropped by over 50% in recent years. Well sadly, these seals are even more endangered and may even become extinct. Many biologists are working really hard to stop this from happening, including friends of Fred and Ron. Fred told me that these seals are declining at about 4% a year in the North West Hawaiian Islands. However, Ron says that more show up in main Hawaiian islands, so there is some hope. The 2 seals we saw swam past at Salt Ponds near Hanapepe where I learned to surf.

Hello Ed and Fred, or should I say Aloha.

There are a few hundred monk seals left in the Mediterranean and these are even more endangered still. The species is classed as Critically Endangered by the 2000 IUCN Red List. These monk seals are particularly sensitive to human disturbance, particularly from coastal development and tourism pressures which are driving the seals to live in unsuitable habitat. In some pupping caves, pups are vulnerable to storm surges and may be washed away and drowned. Although the monk seal is legally protected, it is regularly killed by fishermen who consider it a pest through competing for fish stocks and damaging nets.

Maybe you will get a chance to check this out when you travel to Europe!