My local coast is also visited by sea mammals each year, in particular bottlenose dolphins and common seals. Both of these species are protected because they are threatened by human activities. 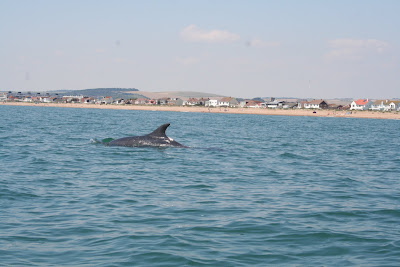 Bottlenose dolphin often visit in the summer months, sometimes as early as March, and may be seen on and off until about September. These dolphins migrate along our coast, usually travelling west to east, often as close at 100 metres from the beach. They are beautiful animals and a spectacular site. I have never seen a whale, but I am hoping I might be able to do some whale watching during my journey around the world. 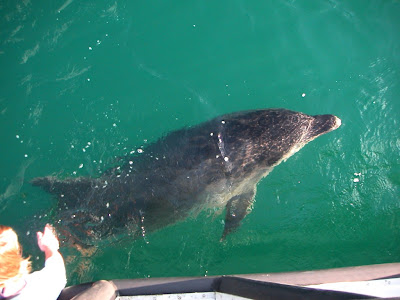 We even had a visit from a sociable dolphin called George (above) who spends most of the year off the coast of France. Unfortunately George loves boats and has recieved several injuries from boat propellors because of this. 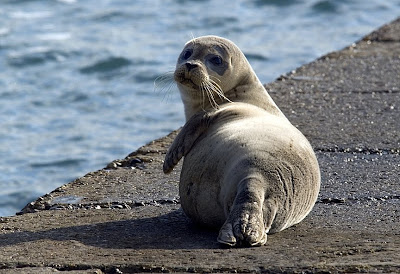 Common seal on a jetty near Brighton (photo by Bill Carter)

Common seals also visit our coast, but sadly the numbers of these seals have declined by over 50% in the last few years. Earlier this year 5 seals a few miles up the coast were fitted with elecronic tags to monitor their movement. This is a small group of seals that live in the Solent area and there is a lot of worry about their future. This is why the seals have been fitted with special tags so scientists can find out the important parts of their habitat. They hope to find out where they feed, haul out on land etc, so these places can be protected for the seals. 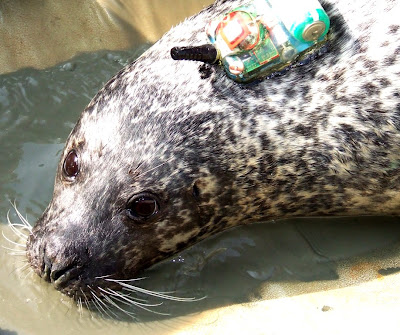 This is one of the seals fitted with a tag, it does look rather funny. Its like having a mobile phone on your head. Everytime the seal comes to the surface of the sea it sends a message (automatically) to a computer which records where the seal is. The tag also records and transmits information about how long and how deep the seal dives underwater and where it rests out of the water. Very clever technology. 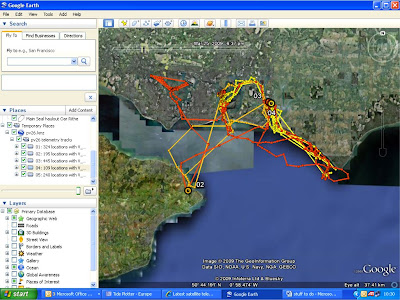 This map shows how the information from the tags can record where the seals travel each day, how far they swim etc.

Surpringly, the common seals that swim past my local beach sometimes also travel many miles up river for a while. Maybe they are following fish? 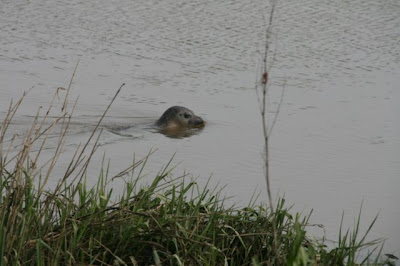 Most of the seals are fit and healthy but occasionally a seal is washed up on the beach because of injury or illness. 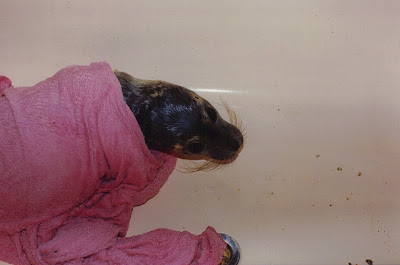 Occasionally we also see the larger grey seal as well. This young grey seal (below) is underneath the footbridge on the river Adur which connects Shoreham Beach with the high street. 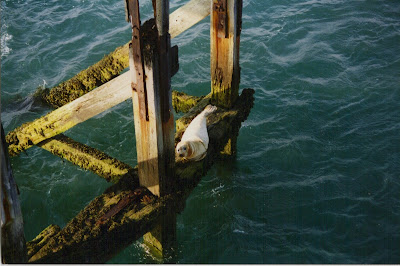 You can find out more about these sea mammals, including the seal tagging project, on the following weblink

There are many types of seal and sealion that live in different parts of the world. I hope to be able to see them on my travels.