Marine litter and other debris

I am sure that it will not be a big surprise to know that we have a problem with litter and other debris on Shoreham Beach. The Friends of Shoreham Beach run beach clean and litter survey events to help reduce this problem and to raise awareness. Globally, marine litter is a huge problem. Marine rubbish of this kind can kill wildlife when it is accidentally swallowed, mistaken for food or when animals become entangled in it. Hundreds of thousands of seabirds, sea mammals, sea turtles and many other marine animals die from marine litter every year. 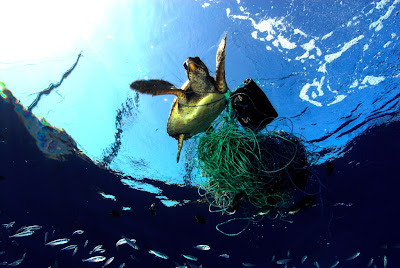 A marine Turtle entangled in marine debris Greenpeace©/Carè©/Marine Photobank
I am planning on finding out more about the problems caused by marine litter including a trip to the middle of the Pacific Ocean. Here there is a vast accumulation of marine debris, miles wide, which has been called the Great Garbage Patch. There is a similar garbage patch in the Atlantic Ocean too.

Marine litter can be a danger to animals on the beach as well. Sea birds often collect nesting materials from beaches and along with the seaweeds and other natural items they also collect litter. The biggest danger is plastic materials which they use to make their nest. When the chicks hatch they may become entangled in the plastic and as they struggle they may break a limb or just become hopelessly entangled.
The Friends of Shoreham Beach have sent me the results of a recent litter survey. The beach was surveyed for 100 metres and all the litter items were collected. 49 volunteers together filled 4 big black sacs with debris. The most common items found were plastic, 746 items, 75% of the total of all items collected. Where possible the source of each litter item was also recorded. Surprisingly, at least 32% of the items were left behind by beach users. This is a large proportion of the litter. 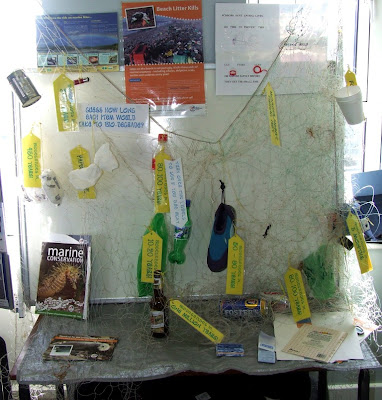 The Friends of Shoreham Beach do a great job with their beach cleaning events. I hope the awareness they raise about beach litter will eventually reduce the amount of litter left behind by people visiting the beach. 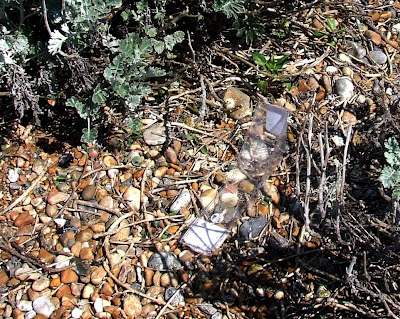 Plastic sandwich packet
Apart from the damage done to the wildlife, litter on the beach spoils the beauty of the beach. Tackling the litter and debris that washes ashore from elsewhere is going to be much harder to tackle.
Bye for now
Ed
Posted by Steve Savage at 11:58