Day 1 A morning of experiments at Amy Slate Resort

I have already made lots of friends at the NABS Youth Summit and I am looking forward to learning lots of great stuff with them over the next few days. As I will be working with the youths and we will be learning things together, I have decided that it would be great to ask the youths to write some of my blog entries for me.

We made an early start, departing the hotel where we were staying and drove 20 miles to Amy Slate Resort. We were greeted by the staff of the resort and Florida Keys National Marine Sanctuary staff. 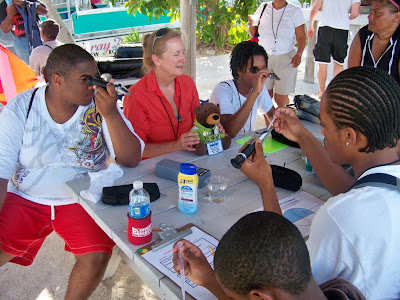 Students collect water from the Gulf of Mexico side of Key Largo to determine the salinity of the water. They place water drops on the plate of their refractometers and peer through the eyepiece to read the scale inside to determine the percentage of salt contained in the water. Ocean water is typically 35 parts of salt to 1000 parts of freshwater usually recorded as 35 ppt. Freshwater of course registers at zero. The higher the salinity, the more buoyant swimmers and divers will be.
DISSOLVED OXYGEN STATION 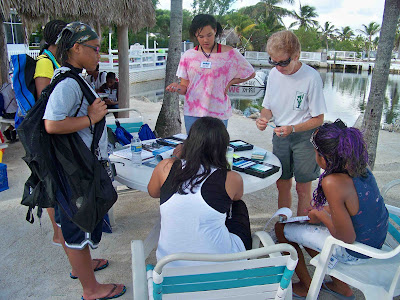 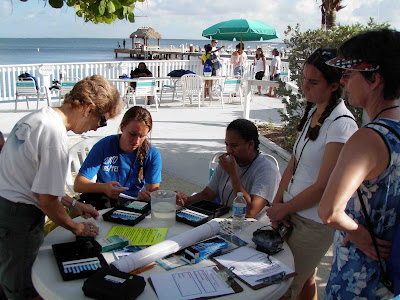 This is the dissolved oxygen station
Disolved Oxygen Station, me. Chanel, Octavia, L Whitney
Hi my name is Ed Bear and I’ve got a riddle for you.

If five fish are swimming and two of them drown. How many fish are left? If you’ve heard this riddle before and answered “Five, because a fish can’t drown.” I hate to say it but you’re wrong. Fish can drown. You’re probably wondering how because fish breathe water, don’t they? Well no they don’t. They breathe oxygen, dissolved oxygen to be exact and if there’s no dissolved oxygen that poor fish will drown.


In Key Largo I was given the chance to learn how they measure dissolved oxygen. In order to measure dissolved oxygen you take a small glass vial filled with a special chemical that turns blue when it touches water with oxygen in it. You place the vial in a plastic tube that looks sort of like s syringe. Place the tube in the water and push down on the vial to break the seal. 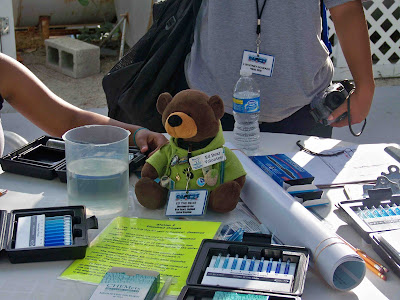 This is kind of hard for me to do because bears don’t have opposable thumbs but you should have no problem. The water will then come rushing into the vial and start changing color. 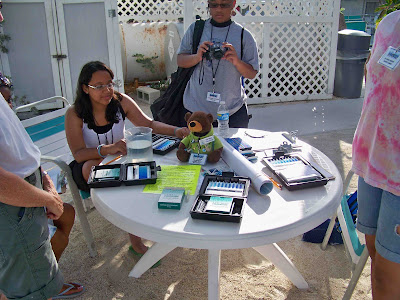 The bluer the solution, the more oxygen present in the water. As you may imagine the water at Key Largo was a deep blue with dissolved oxygen measuring at about 4 parts per million (ppm). Giving the fish enough oxygen to breathe comfortably and not drown.

This entry was written by Octavia Shaw 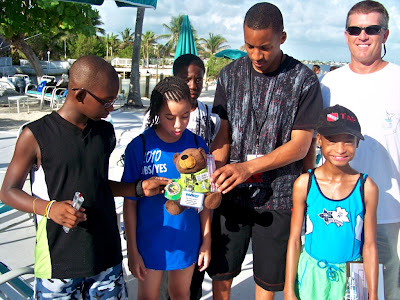 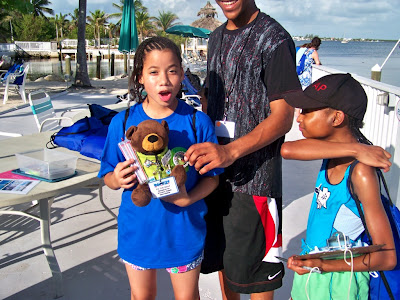 Weather Station – At the weather station students read air and water temperatures, wind speed or velocity, the barometric pressure and the level of humidity or the amount of moisture the air is holding. Weather data is important to record when doing any kind of field work since weather influences and affects everything we do and all organisms on our Ocean Planet.

Ed Bear here, in Florida they are constantly looking out for changes in the weather to ensure they are prepared for future weather disasters. We were able to calculate the percentage of clouds in the sky by imagining all the clouds pushed together in the sky and determining how much of the sky they will occupy. We felt that the percentage of the clouds were about 45%. We also had a chance to measure the wind with an anemometer. This device is a tall cylindrical tube that has two holes on one side (one close to the top and one close to the bottom). This gave us fairly precise measurement of how much wind is blowing. Last but not least we measured the direction of the wind using a compass. Turns out we found the wind to be blowing east. You can learn so much with the weather.

This entry was written by L’Whitney Gowans

SECCI DISK STATION
Every time you go to the Keys, you ALWAYS learn something new. Especially when you learn some new crazy name about a tool used for visibility or depth. That tool is the secci disk.

It is a black and white plastic disk that is connected to a measuring tape (just as simple as it sounds). To start the calculations, we lowered it down into the clear water and watched as it was harder to see as it decended into the unknown. I, Ed bear, however could see that the “unknown” was actually some bare substrate on some rocks and covered in algae. Measuring the visibility from the disk was actually harder then looking into that “unknown”. (You may remember I watched some students using this last time I was here)


How you measured it was, you had to find out how far the disk was from the water, subtract that from the actual depth (using the secci disk of course), and finally you have successfully accomplished your task. I bet I would have learned more at the station if I wasn’t whisked away to the next but what I did get out of it was this; don’t underestimate the power of a plane plastic disk. It could just be the scientific fact that could solve a disaster.


This entry was written by Jessica Silk (SCUBAnaut)

Hello everyone this is Ed bear, and I’m enjoying the sun shine state in the Florida Keys with NABS/YES. Today we learned about a variety of subjects having to do with Water quality testing methods NOAA uses in there Marine Sanctuary. One of those methods was the Niskin bottle; I used it to retrieve water from depth to be tested. The device is spring loaded and so when it reaches the right depth, you use a small weight to set off the release of the closing system, by sending it down the retrieval line.


The container then closes and traps about a litre of water inside and can then be hauled back to the surface. The Niskin bottle can be used on a boat or from shore making it versatile and it appears to be made from sturdy replaceable materials making it a perfect tool for a range of environments. In a real life testing situation you would then take that water and test it at the other stations. I worked hard to get the system to function
correctly, and eventually I was able to increase my skill and take a sample from the dock water where we practiced. I learned many skills to day the Niskin bottle was one of the trickiest


This entry was written by Wadjo Tillman

Today at the youth summit we had a blast! The day was organized by different learning stations. We learned about dissolved oxygen, water salinity, and secchi disk. In the lab about dissolved oxygen we leaned the importance of having it in the water, and the way that the levels are measured. The water salinity station, which was taught by Mrs. Cathy Sakas, was also very interesting. We learned the scale that is use to measure the amount of salt in the water, and how to read the information that we collected using the Refractometer. One of the last stations that we went to was the secchi disk, which is used to measure the clarity of the water. It’s very simple; all you do is lower the disk into the water until you can’t see it anymore. Then you record the depth to where you could no longer see the disk. Then look at the scale that is provided to see find the clarity of the water. Over all we had a great day and learned a lot. I can’t wait to see what we get to do tomorrow.


This entry was written by Bresha
Wow we found out so any things about the ocean and much of the equipmemt was quite tricky for a bear with such little paws, so it was great to have help from my new friends. And that was just the morning! Ed
Posted by Steve Savage at 09:12