Hi all.
After our tour of the Heritage Center yesterday we had a lot of questions. As you know I am fascinated by maritime history. So today, we set out to learn more from the sanctuary staff about the history of the ships in Thunder Bay.

“An etching of the sidewheel steamer New Orleans as it looked in the 1840’s.”

Last night we learned that there were a lot of ships that sank in Thunder Bay. Today Sam and I wanted to find out why. We learned that storms, heavy fog, unmarked shoals (that’s a fancy word for shallow water) and fires all caused shipwrecks. Sometimes mistakes made by the crew caused wrecks too. Many boats in Thunder Bay ran into each other just like cars do today! I guess the lakes must have been very busy for that to happen! 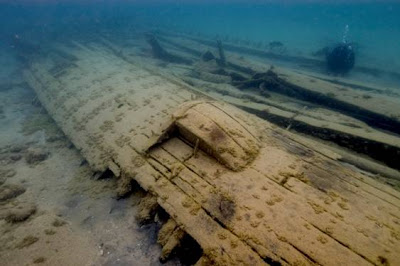 The earliest shipwreck discovered in Thunder Bay happened in 1849. This ship was a side-wheel steamboat called the New Orleans. Her job was to carry passengers up and down Lake Huron. One day the boat got lost in a thick fog near Thunder Bay Island. Because the captain couldn’t see, the New Orleans got stuck in shallow water. Everyone on board was rescued by fisherman. Today people like to take boats and visit the wreck of the New Orleans. Here is a photo of what the shipwreck looks like. Boaters can easily find it because the sanctuary marks its location with a buoy.

Another shipwreck in Thunder Bay is the steamer Pewabic. Her story is a real mystery! In August, 1863, the Pewabic was headed south from the Upper Peninsula of Michigan. She was carrying passengers and copper. The weather was perfect! As she was about to pass another ship, the Meteor, she suddenly turned. Right in front of the other ship! The Meteor didn’t have time to react and crashed into the side of the Pewabic causing her to sink very quickly. To this day no one knows why the Pewabic turned.

This photomosaic shows what the Pewabic looks like today. A photomosaic is a large picture put together from many other pictures like a puzzle.

The New Orleans and the Pewabic are ships that sank a long time ago. I wanted to know if there were any ships that sank not so long ago! Sure enough, Steve had one - the Norrdmeer.

This was a ship that traveled all the way from Germany across the Atlantic Ocean to the Great Lakes. Her job was to bring steel to the United States. Just North of Thunder Bay Island she hit a shoal and sank in shallow water. Steve showed Sam and I some pictures of the Nordmeer long after she sank. Both of us were surprised to see a chunk of the boat sticking up out of the water! We were even more surprised to find out that the chunk stayed like that for over 40 years!


“The last remnant of the hull above the surface of the water last year, no longer there today.” 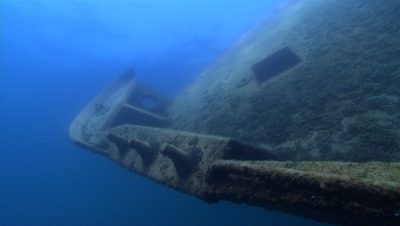 “The Nordmeer sits just below the surface of Lake Huron.”
Wow, these stories show just how important the oceans, rivers and lakes are for trtasporta nd ferrying goods. You might be surprised to know that many things are still transported in this way today. If you would like to learn more about the many shipwrecks contained in Thunder Bay National Marine Sanctuary visit their website at http://thunderbay.noaa.gov/