It was a long journey, but I have finally made it to the Fabulous Florida Keys! Sanctuary Sam and I flew into Key West to visit the Florida Keys National Marine Sanctuary; home to the world’s third largest barrier/bank coral reef. Wow, I didn't realise that the USA had such big reefs.

As we gazed out of the airplane window during descent, it seemed like the pilot was going to land us right in the water! Thankfully, there suddenly appeared what seemed like hundreds of small, flat islands covered with bushy trees (I later learned that these trees are called mangroves). The water looked very clear and shallow, and as we got lower we were surprised to see a large stingray gracefully swimming just below the surface. As we flew south-east over the islands to make our approach to the airport, we even got to fly over the coral reef! 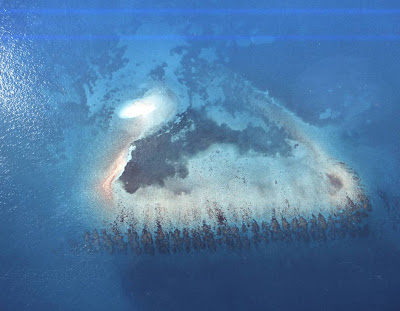 World Famous Looe Key Reef and Sanctuary Preservation Area as seen from the air
The coral reef here in the Keys looks a little different than the ones we visited in the South Pacific. Instead of the reefs surrounding tall, volcanic islands close to the shore, these reefs formed parallel to the mangrove islands of the Keys about five to ten miles from the shore on what locals refer to as the “ocean side”. 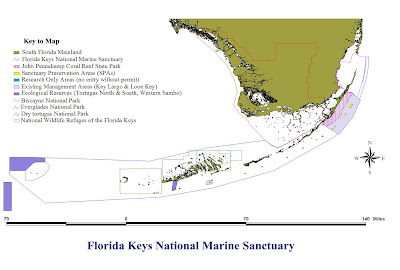 As you can see from the map, the islands run basically east-west underneath the Florida mainland. Key Largo is 50 miles south of Miami, and as you drive down historic US-1, it is about 100 miles from there to Key West. To the north is the Gulf of Mexico (or “gulf side”), and to the south is the Atlantic Ocean. We learned that the Florida Keys National Marine Sanctuary surrounds and protects over 2900 square nautical miles of coral reefs, vast seagrass meadows, and lush mangrove islands. 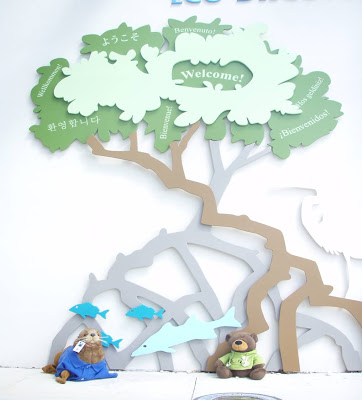 Tomorrow, we plan to visit the Sanctuary’s Visitor Center, The Florida Keys Eco-Discovery Center, to learn about the different habitats and animals that make this place so amazing.
Bye for now, Ed
Posted by Steve Savage at 11:52