Hi Everyone! Sam and I are no longer beside the sea. We have just arrived in a system of fresh water lakes in North America called the Great Lakes. Was I ever surprised that we were heading AWAY from the ocean to visit the Thunder Bay National Marine Sanctuary (which is in Alpena, Michigan!)

I had to ask Sanctuary Sam about why there would be a marine protected area in a lake, and he explained to me that the Great Lakes are actually the largest surface chain of fresh water anywhere in the world! The largest of these lakes is over 1,300 feet 9396 m) deep and altogether the lakes cover an area (94,250 square miles (242,000 sq. km), that’s almost as big as the surface area of the U.K.! This system of lakes is so big it contains 20% of the world’s fresh water (6,000 trillion gallons)! Wow that is amazing. 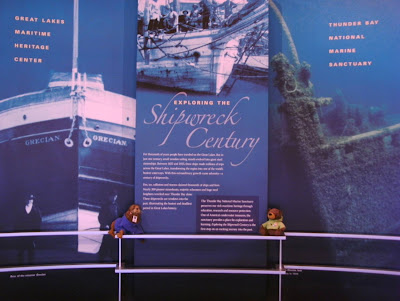 “Here is a picture of Sam and I entering the visitor center at Thunder Bay National Marine Sanctuary. Their exhibit is titled “Exploring the Shipwreck Century” 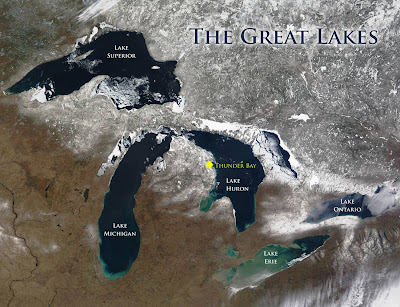 Sam said that Thunder Bay National Marine Sanctuary is located on Lake Huron, one of the 5 Great Lakes. Here’s a picture of Sam and I looking at it right now. It was just like looking at the ocean it was so big. 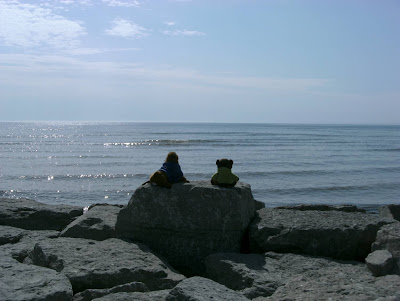 It is certainly much bigger than any lake I’ve ever seen in my travels before. It’s no wonder they call these lakes “great”!

The cold, fresh water of these inland seas preserves wooden shipwrecks from long ago very well. Sam said that the wood on a shipwreck in the ocean is usually eaten by a mollusk called a Teredo (also called a shipworm), but since the Teredos can’t live in fresh water, even very old wooden shipwrecks in the Great Lakes are a lot like they were the day they sank. The waters of Thunder Bay contain some of the best preserved shipwrecks in the world because of the fresh water in Lake Huron. This means that archaeologists can explore shipwrecks that haven’t changed very much in over 100 years when they visit! As you know I am very interested in maritime history so I was keen to find out more. 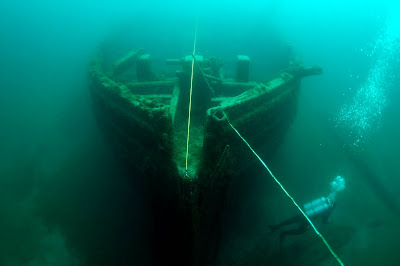 This is a picture of a Thunder Bay shipwreck named the E.B. Allen. This boat was run into by another vessel in 1871 and is still nearly intact on the lake floor today.”

As you know I’ve already been to the Monitor National Marine Sanctuary which protects one very special shipwreck, but Sam said the region of Lake Huron that contains Thunder Bay National Marine Sanctuary holds nearly 200 shipwrecks, many still waiting to be discovered! He said that this is why there is a sanctuary placed here to help protect the many shipwrecks of the area from harm. 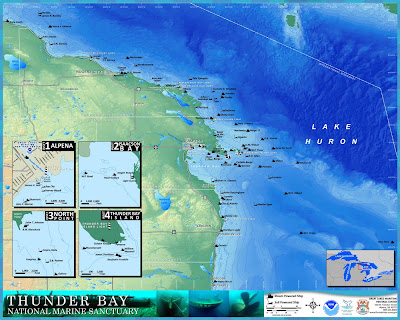 “Here is a map of all of the shipwrecks in the Lake Huron region where Thunder Bay is located.”


I was very excited to learn more about these shipwrecks, so Sam and I headed into the sanctuary’s visitors’ center to meet the staff. There I met Pat, the historian for the sanctuary. Pat explained to Sam and I that many types of boats have worked on the Great Lakes in the last 150 years. Thunder Bay National Marine Sanctuary contains an example of nearly every one of them in its 448 square-mile area. These shipwrecks are all preserved, protected and documented by the staff working at Thunder Bay and the data they gather has helped them to construct the special museum exhibit contained in the visitors’ center.

I was getting tired after my long trip from California, but the staff said that we should spend a few minutes in the exhibit before we turned in for the day. I’m glad we did because we learned some fascinating things and had a lot of fun! The staff showed us around their exhibit and took us on a tour of a 19th Century Great Lakes schooner recreated in their museum. We learned that this sailboat was built using the archaeological data gathered from a nearly intact schooner resting in 185 feet (56m) of water that wrecked way back in 1875!This huge sailboat model was made to show visitors what it would be like to be in a storm on the Great Lakes and it certainly was scary at first! 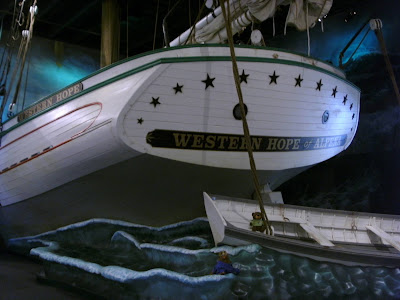 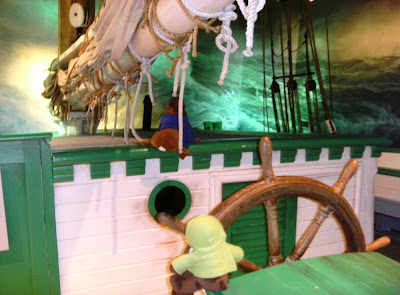 “Here are some pictures of Sam and I in the visitor’s center, a full-sized schooner was recreated in the exhibit. It’s very big, and Sam had to help as the lookout while I steered the boat.”
Next, Sam and I went on to explore what one of these schooners looks like shipwrecked on the lake bottom today. The discovery tubes let us see what it was like to scuba dive over one of these shipwrecks, and we didn’t even have to get wet! Sam said it made him really want to get into the water. 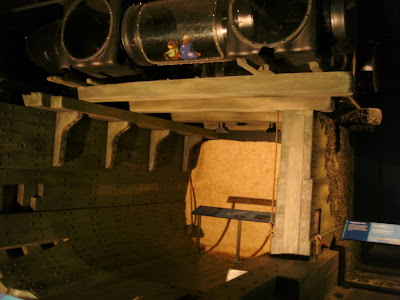 The staff promised us that we would get to see a real shipwreck up close underwater while we were in Thunder Bay. Now I have seen these exhibits I am even more excited than ever. A chance to explore a real wreck in my diving bubble.
Well, it’s been a big day for Sam and I and it is time we got off to bed! 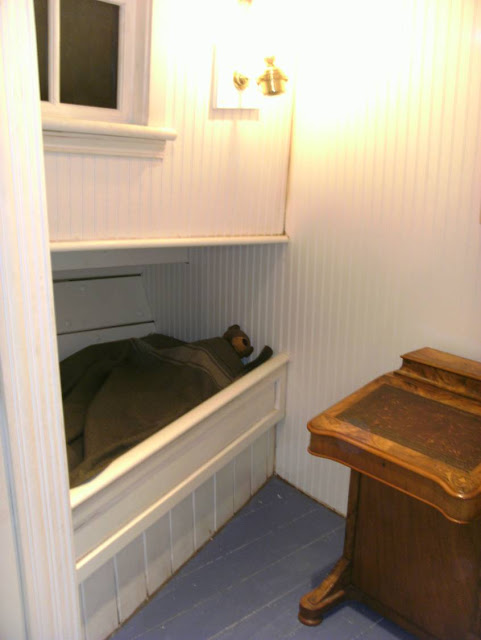 “As a special treat I get to sleep in the Captain’s bed on the schooner, it will be a great night’s rest!”
Bye for now, Ed
Posted by Steve Savage at 16:48