Sanctuary Sam and I arrived at the Gulf of the Farallones National Marine Sanctuary offices in San Francisco, California today. This is quite near to the Cordell Banks Sanctuary offices I visited earlier this year. I’ve heard San Francisco is famous for its fog, and it was very dull when I came last, but today it was a beautiful, sunny day, and the Golden Gate Bridge, near the sanctuary offices, glowed a bright orangey-red – not golden at all! 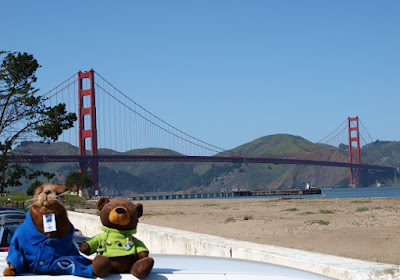 Unlike the offshore Cordell Bank sanctuary, the Farallones sanctuary is right next to San Francisco where about 8 million people live. Lots of people, and lots of wildlife, all living side by side. The Farallones sanctuary protects the waters outside the Golden Gate Bridge and around the Farallon Islands, which are about 27 miles offshore. It also includes some shallow coastal areas, called estuaries, like Tomales Bay, and Bolinas Lagoon. 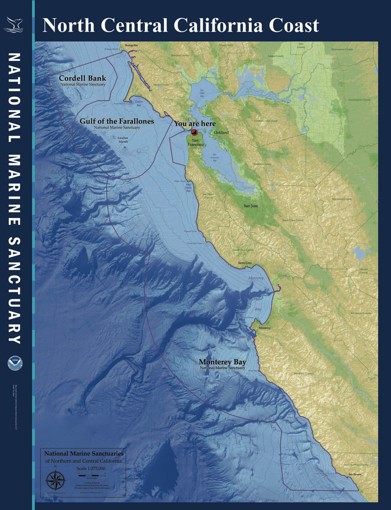 In this map you can see Gulf of the Farallones National Marine Sanctuary where I am now, the Cordell Banks Sanktuary where I visited before and Moneray Bay (my next destination)
But for now there So much to discover here! First we learned about the local wildlife with a Visitor Center tour. The visitors centre has life-sized replicas of white sharks and giant elephant seals. 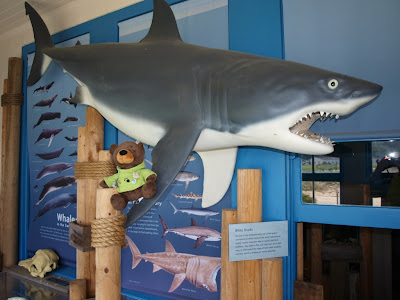 I'm glad this great white shark is only a model. I know humans are not their usual prey but a little bear like me could easily be mistaken for a tasty morsel. My buddy Steve, back in the UK, teaches people about sharks and he has written books about sharks as well. Steve also has a seal shaped decoy which has been chewed up by great white sharks that the kids can handle. 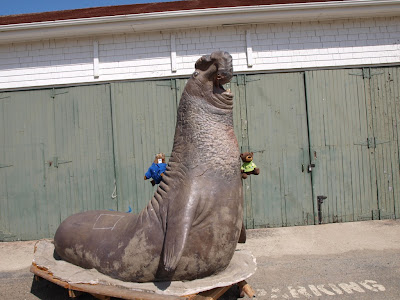 The enormous elephant seal replicas were fabulous, and we even listened to recorded whale voices – something Sam has experienced before while actually swimming in the ocean with them! Awesome sounds!
The aquariums have big green and tiny pink anemones. They are so huge they look even more like plants. 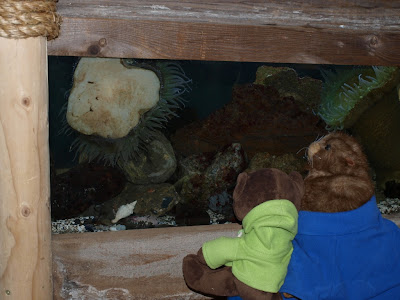 I was so surprised when I first discovered that sea anemones were actually animals. In another aquarium tank there was a monkeyface prickleback eel named Monty, some crabs, and a big abalone.
I learned that this part of the Pacific Ocean is one of the four most productive areas in the world because of something called “upwelling.” Along the coast here, strong springtime winds push the surface waters offshore and that brings cold water, which has lots of nutrients in it, up to the surface. Near the surface, the combination of nutrients and sunlight allows the tiny one-celled plants, called phytoplankton, to grow really fast – just like a garden that’s been fertilized. Lots of different kinds of animals eat this plankton, including little shrimp-like animals called krill. Krill is a very important food, and there’s so much of it here, giant blue whales come here in the summer to feed on and can eat up to four tons of it each day!
But many other kinds of animals live here, too: 36 species of marine mammals (like Sam’s buddies, the California sea lions, seals, sea otters, porpoises and dolphins), and thousands of different fish, birds and invertebrates – sea snails, limpets, sea stars and sea urchins. In fact, there is so much food here, that many animals travel thousands of miles just to come here and feed, including seabirds and even sea turtles. One bird, the Black-footed Albatross, flies here from Hawaii to get food to bring back for its chicks. It takes the bird three weeks to make the trip here and back – that is a really long way to go for a grocery run! 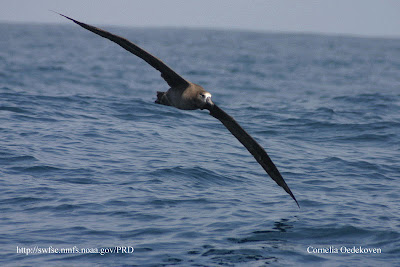 The Farallon Islands, a very rocky and jagged group of rocks, aren’t actually part of the sanctuary, but are a National Wildlife Reserve where hundreds of thousands of seabirds nest, and five types of seals and sea lions come ashore to rest or have their pups (babies).

There are no schools or shops on the islands, not even a dock: to get on the island, a crane lifts people and supplies from a boat onto ledge. That must be exciting – and maybe just a bit scary. Only a few scientists can live on the island at a time, to make sure the wildlife won’t be disturbed.

The Sanctuary Visitor Center exhibits gave us just a sneak preview of different animals and habitats of the sanctuary. We got to get an up-close look at some these animals in the visitors centre aquariums, and found some of the same creatures under the dock and among the rocks and sand on the beach outside the visitors centre. We are hoping to encounter even more of them out in the wild during the rest of our visit.

All the animals - the tiniest krill, the birds, seals, fish, whales and even sharks that feed in the sanctuary waters around the islands, and the humans that fish or swim in these waters need a clean, healthy ocean to survive. And that’s why this area is a sanctuary – because things like ocean dumping and oil drilling that would pollute the water, or disturbing wildlife are not allowed. It’s good for them, and good for us.
Posted by Steve Savage at 08:22