Linda took me up to see an erupting volcano today! I was a bit nervous about this but I hardly even realised that I was on one, until I saw all of the gases and steam coming out of the top at Halemaumau crater. England, where I come from is an island and it was cut off from the rest of Europe when sea levels rose after the last ice age. I thought all islands were made the same way until Linda explained. Then I realized, ALL the Hawaiian Islands were formed by volcanoes! That’s a lot of volcanoes. 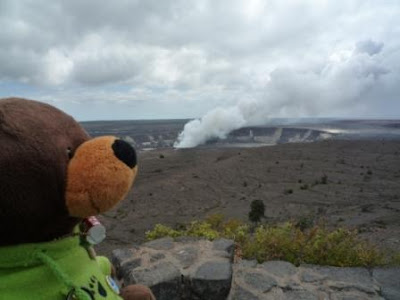 This island has several that still erupt, creating new land. The rest of the Hawaiian Islands’ volcanoes don’t erupt anymore and are eroding away. But Linda said that’s natural. It’s all part of the life of an island born from a volcano.
Tanya explained that this volcano that I am standing on is where all of the islands were born. It’s over something called a “hot spot” and the land I’m on is called the Pacific plate and is moving very slowly over it - really slowly - about as fast as your finger nails grow which is only about 3 ½ inches a year.

You may remember I learned about these plates back in Cordell Bay when I found out about the San Andreas Fault. The hot spot is where the lava comes up through the earths crust. The hot spot stays where it is, but the plate moves, so over a very long time a whole line of islands are created. Tanya told me that the islands that are part of the Monument are ancient volcanoes covered in coral.

Now, I started to get a little confused at this point, so decided to do a little tree climbing instead. Nothing like climbing a tree to clear the old head. 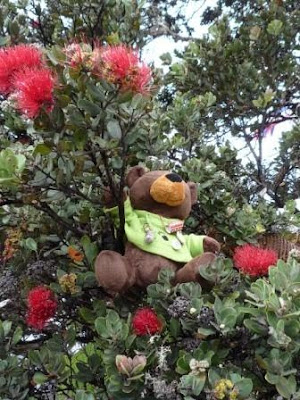 Here I am in this Ohia tree, a flowering evergreen tree which is only found on 6 of the Hawaiian Islands.