Helping out with a Beach Watch Survey 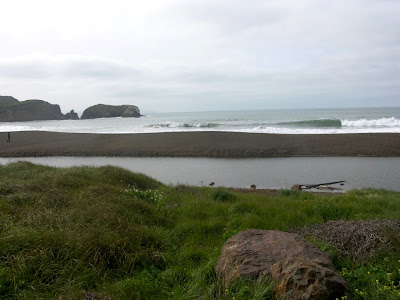 Jan told me that Beach Watch is a beach monitoring program. Since 1993 the programme has trained volunteers to undertake two surveys each month of over 150 miles of sanctuary coastline.

More than 100 volunteers from all walks of life take part in Beach Watch. Beach Watch surveyors count live and dead animals at the beach, record levels of human and dog activity and look for oil or other signs of ocean pollution. This data is used to help protect the sanctuary. They can watch for changes, such as an unusually large number of dead birds on the beach and then look for clues as to what might be causing the change (lack of food or an illness, for example). Knowing what is “normal” by doing regular surveys also helps sanctuary managers have an idea of how an oil spill or other disaster affects our local beaches by having real “before” and after data to compare. Such data was extremely useful during the Cosco Busan oil spill in 2007. 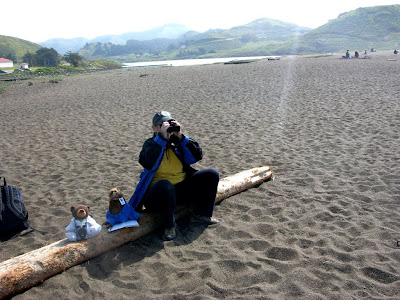 Ed, Sam and Jan taking a break from the survey
During Sam, Jan and my survey today at Rodeo Beach, we counted people, birds and marine mammals along the beach as well as any dead birds and mammals that had washed up on the beach. We also kept our eyes open for oil and marine garbage. Luckily there wasn’t any oil. I got to practice sampling oil on a previously collected oiled bird (a rubber ducky!). 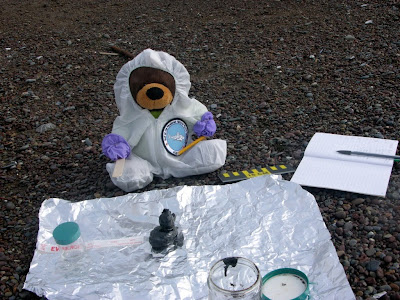 I wore a specially made Hazardous Waste Operations and Emergency Response suit (HAZWOPER for short) with gloves to protect me from getting oil on my fur. (People use these suits so as not to get the oil or other toxic chemicals on their skin when involved in a cleanup.) 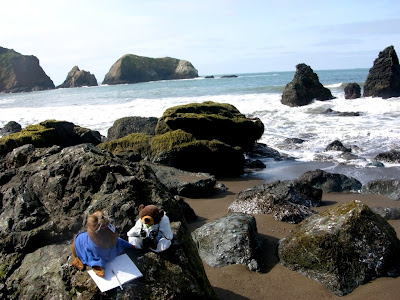 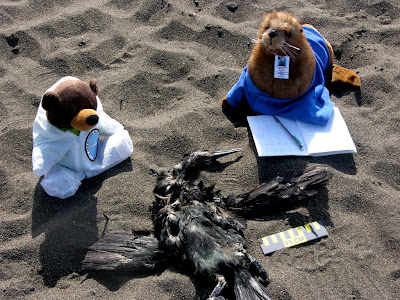 Collecting data ona dead bird
Jan said today was a historic survey, because we had the first recorded sighting of a sea otter off this beach. Sea otters are rare north of the Golden Gate Bridge, although in olden days they were quite numerous in this area. Jan explained that before being hunted for their fur in the 1800’s and early 1900’s, sea otters were found all along the Pacific Coast of North America, from Mexico up to Alaska. In 2007, the annual sea otter count found just over 3,000 sea otters in the central California coast, down from an estimated population of 16,000 before they were hunted for their fur. Jan explained that the California's sea otters are the descendants of a single colony of about 50 southern sea otters discovered south of Monterey in 1938. Now they are typically found from Santa Barbara to San Francisco, a very small portion of their former range. Ypou can see a pocture os sea otters in an earlier blog entry 17th February 2010 called "The Science of Surfing." Today’s sighting means they may be expanding their range a bit – it is a hopeful sign!