We are here again at Adur World Oceans Day. I have updated my exhibit to include my new adventures since last year. In particular my trip to USA last year where I worked with Youth Dive with Purpose who weer helping to restore a coral reef and survey a ship wreck (link). 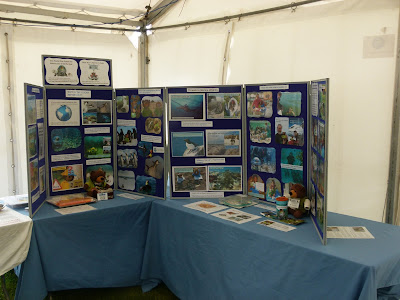 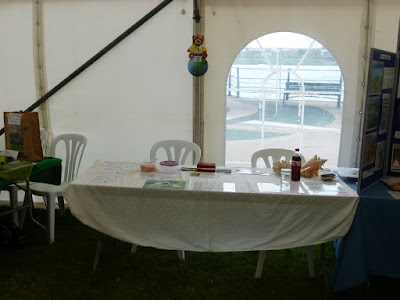 This year, the theme for World Oceans Day is plastic pollution in the oceans. So we included lots of examples from my travels that illustrate this problem.

I wore my special necklace I was given by Ron Hirshi and Fred the happy face monkey while I was in the Hawaiian Islands a few years ago. The necklace is made from a scientists ring that was placed on a Laysan Albatross chick so the scientists could study the birds life as it grows into an adult. Sadly the chick (along with many others) died from swallowing plastic. So I wear my necklace to help me share what I discovered about the dangers these albatross face.

I also had my display of plastic which was removed from an entangled Cape Fur Seal in South Africa. They were the lucky ones because human divers weer able to remove the plastic packaging bands.

A new part of my display this year explained about micro beads - which are actually tiny pieces of plastic. Some body scrubs and toothpaste actually use micro beads in their scourers! 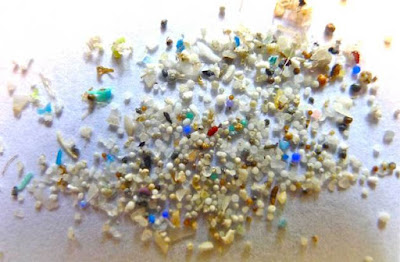 We also had a game for children which was a bowl of uncooked rice and lentils. The rice represents food, the lentils pieces of plastic. 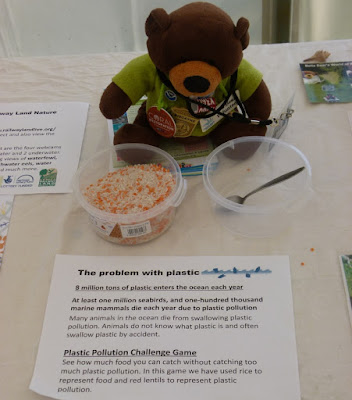 With a teaspoon, the children have to remove as much rice (food) as possible and as few red lentils (plastic). The aim is to show how difficult it is for marine animals to catch food without swallowing plastic debris. The children only have a minute to complete the task. 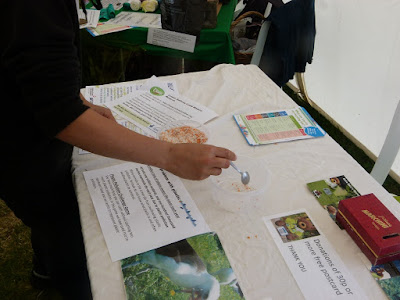 If they go really slow and only pick up a few pieces of rice/food (and no plastic) then they will not have collected enough food to keep them alive. If they go quicker, they collect lots of bits of plastic.  Its then interesting to get the children’s view on the activity and then it’s all related to other images and information on the display.

There were loads of interested visitors to the event, in fact we hardly had time to even stop for a snack. 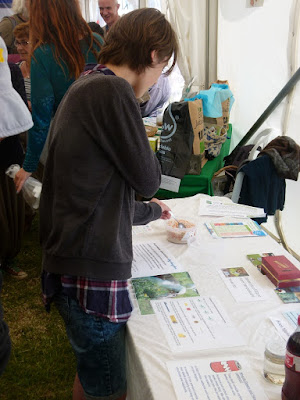 Lots of children played the plastic food game and we were pleased to see some adults having a go. It was good to see that many other people are concerned about the damage being done to the ocean. 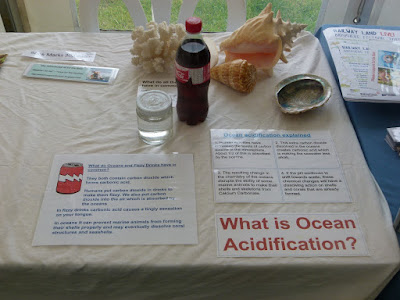 We also had our usual ocean acidification demonstration explaining how an increase in man-made carbon dioxide the air is leading to an increase in the ocean. This increase is causing the pH of seawater to change threatening many animals that have a calcium shell from crabs and sea urchins to corals.

We also had a display explaining how climate change might affect local fish. It focused on fish and chip shops and a display about how cod may soon be out of the reach of our fisherman as our water warms and the cod move with the colder waters. 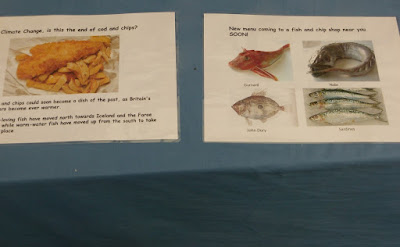 I included an alternative visual fish and chip shop menu of (warm water) fish we may be eating instead (such as gurnard, hake, sardines and john dory) that are becoming more common.

There were also many other exhibits too. 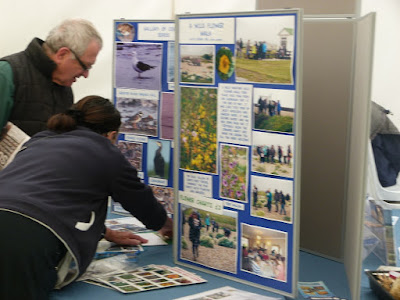 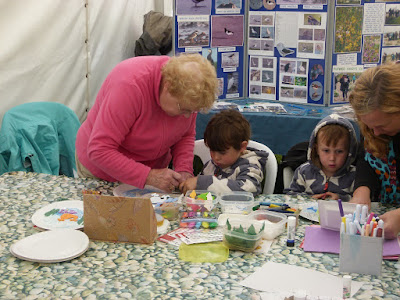 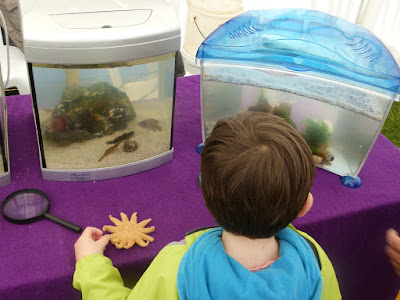 They weer enjoyed by children young and old. 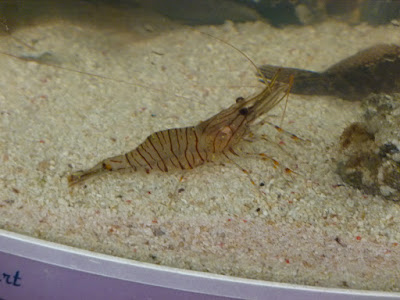 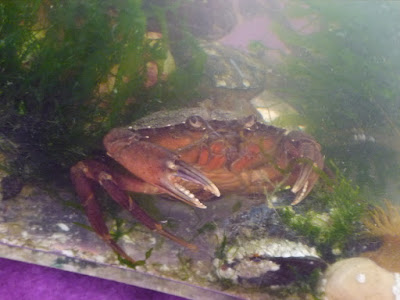 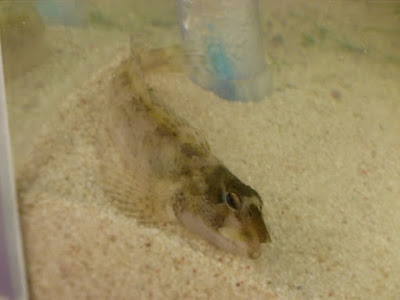 Common blenny fish and much more. 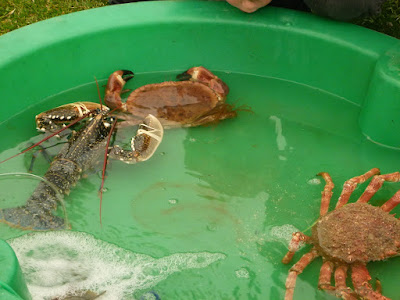 There was also a very popular display of live lobsters and edible crabs.

Next to my display was an exhibit showing environmentally friendly alternatives to cosnmetics and cleaning produces, to replace those that might pollute the sea. 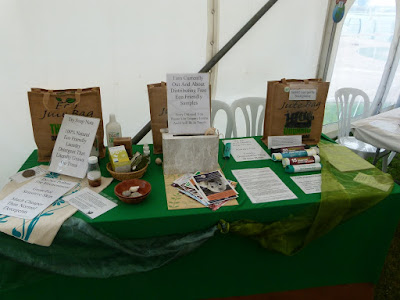 So I lent them my micro-beads information. 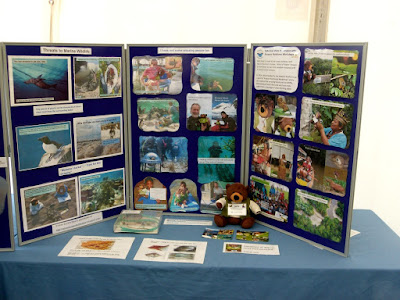 She also meet some of the people who live in the rainforest and how they get everything they need from the forest but do so without damaging the forest. 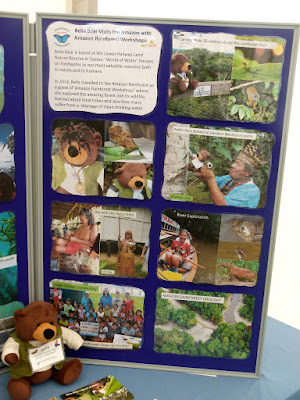 We had an amazing day sharing my and Bellas adventures with the visitors. Great day.
Bye for now
Ed Bear and Bella