Aloha from Kauai, one of the Hawaiian Islands

Hi all or should I say Aloha

I have just arrived on the Hawaiian Island of Kauai with Fred and Ron. Wow, what a beautiful place. 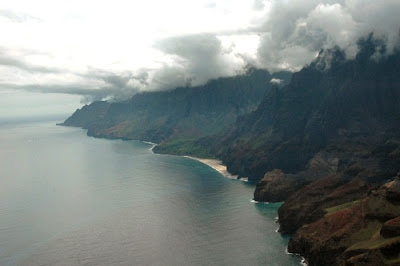 I had heard that the Hawaiian Islands were stunningly beautiful but even so I did not expect this. I always wondered what the expression "takes your breath away" means. Now I know.
I e-mailed my sister Bella to see if she could find out some information about Kauai for me. This is what she sent me.
Kauai is the oldest of the main Hawaiian Islands - these islands make up the 50th State of the USA. Kauai is home to Wai'ale'ale, the wettest place on earth, meaning "rippling water" or "overflowing water. This mountain rises up 5,028 feet (1524 m) above sea level but much of it is hidden behind the clouds and the whole mountain can only be seen about 20 days a year. The slopes are covered with stunning mountain rain forest which is not surprising as about 460 inches (1168.4 cm) of rain falls here each year. This rain feeds the source for all of the rivers, many of the waterfalls, and a lot of the streams that can be found on Kauai. No wonder it is also known as the Garden Island.
I came here to find out more about the albatross and the dangers that they face from plastic litter. Bella tells me its not just the albatross that are threatened. There has been a great loss of native plants and animals, in fact more species are endangered in the Hawaiian islands than in all the other 49 United States combined. It is likely that many species remain to be discovered in the fragile rainforests of the uplands, some people say they may be the most endangered rainforest on earth.
I have arrived too late to see the O'o bird which disappeared in about 1991, this little bird lived in the surrounding rainforests. Like many other native Hawaiian birds, the O'o is extinct because of habitat changes, introduced predators, and disease. Bella tells me that the Kaua'i O'o, was the smallest of the honey eating birds in the Hawaiian Islands, measuring only 20 centimeters long. It was black (or grey) with yellow markings on the legs and underbelly and used to sip nectar from the flowers of local trees on the island, its favorite being the Lobelia tree. O'o would also eat insects and flowers as well.
It is said that the Kauai O'o made beautiful song, with its musical, flute-like calls. Both males and females sang, and the sound was said to be truly touching. It must be a sad lost. We have blackbirds back home which I enjoy listening to. Their song is also described as flute-like and I would certainly miss their beautiful song if they were to disappear.
Bella, who is a bit of a movie buff has also discovered that scenes from many movies were filmed on Kauai. Maybe I will get to see where they were filmed. While I am here I will be staying with Fred, Ron and his wife Brenda, in a little secluded house down an old dirt road, sounds perfect.
Well since I arrived I have been helping Fred to collect sand samples to check for micro-plastics. Fred took me to collect sand at Moloa'a where Gilligan's Island was first filmed and Papaa Bay where the crash scene and encampment of Harrison Ford and Ann Heche was filmed in Six Days and Seven Nights. Bella will be so jealous! King Kong, Jurassic Park, and other movies were also filmed around the island because of its spectacular land and waterscape.
You may remember me mentioning micro plastics before. These are tiny pieces of plastic, the result of larger pieces of plastic litter breaking down in the oceans, which are then eaten by fish and plankton. These tiny pieces of plastic often absorb pollutants making them doubly dangerous to animals that swallow them. And of course, when the plankton and small fish are eaten by larger animals, they get these pollutants too. we are checking for these tiny pieces of plastic in beach sand samples.
Guess what, while Fred and me rested on the beach we were joined by one of Fred's friends Pia. 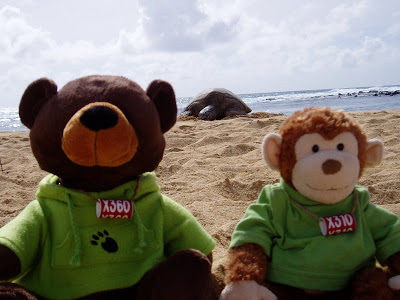 She is a beautiful green turtle, Fred told me that honu is Hawaiian for green turtle. Pia has been coming up on this beach on the sunny south shore for about ten years. Turtles are very long lived animals, and Pia said that at one time the ocean was not always full of rubbish. She says she comes ashore to rest because she gets so tired of getting bonked in the head by plastic bottles and poked in the eye by plastic toys and lighters and pens and stuff like that. Pia told us that her ancestors used to come ashore right here in this very spot to nest. Honu can't do that anymore because the sunny south shore is filled with tourist places. Last time her auntie tried nesting here on the sand, the keiki (little ones) all got out of the nest and went up to the lights shining from the human tourists buildings, being confused by what had not been there before. She guesses they thought the bright city lights were the light of the moon on the waves (nalu) which newly hatched turtle follow to find their way to the sea. We sat and chatted for a while and then Pia went back in the sea.
Bye for now
Ed
P.s. Bella says that Eki means Ed in Hawaiian (don't know if she is right)
Posted by Steve Savage at 12:09