Ed the Bear helped run a sea mammal watch at Shoreham Beach Local Nature Reserve on 30th July to encourage local people to participate in National Whale and Dolphin Watch and to raise awareness of the seals and dolphins seen locally. 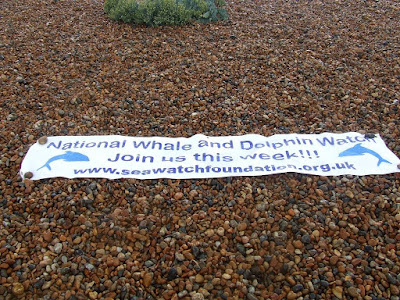 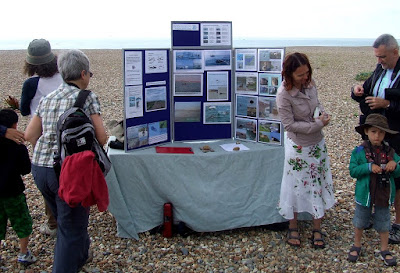 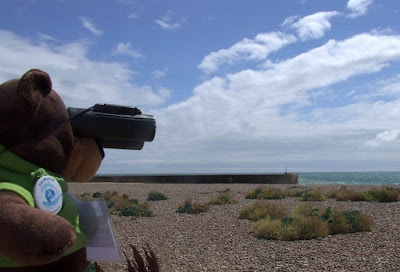 National Whale and Dolphin Watch provides a valuable annual snapshot of sea mammal activity across the 35 UK regional groups and is part of the foundations ongoing observation programme to survey and protect UK dolphins and whales which number a surprising 29 species. http://www.seawatchfoundation.org.uk/ 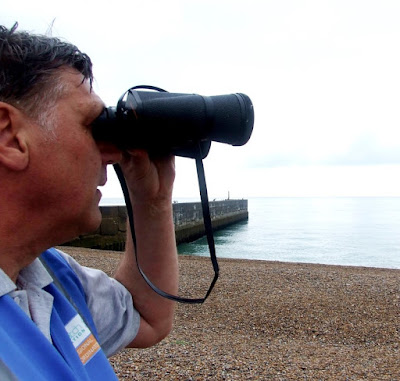 The Shoreham watch started unofficially at 9.30am when I arrived to set up the display stand and took the first scan of the sea with binoculars. This first record of the day recorded the sea conditions at sea state 2, with a wind force of 2-3 from the SW. Cloud cover was 7/8 and the visibility was good. 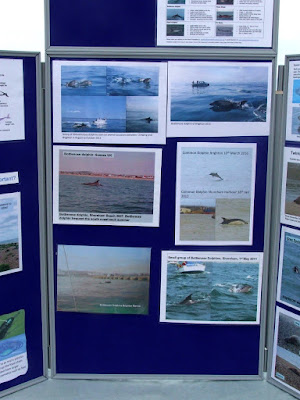 The display stand provided information about the Sea Watch Foundation and also depicted some of the local dolphin and seal sightings including examples from this year.
There was also information about threats to sea mammals and the ocean including micro plastics and over nutrification of coastal waters caused by nitrates such as from detergents and water run-off from agricultural land.

The first person arrived just before the official start time of 10.00am and soon we had a small group of dedicated watchers. At 10.30am newly enlisted Sea Watch Volunteers Hannah and Neil arrived to help with the survey. 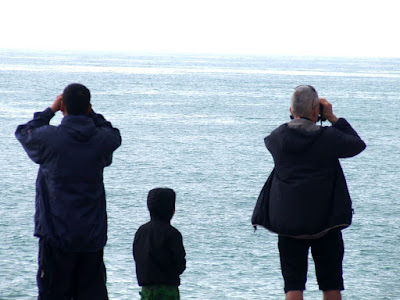 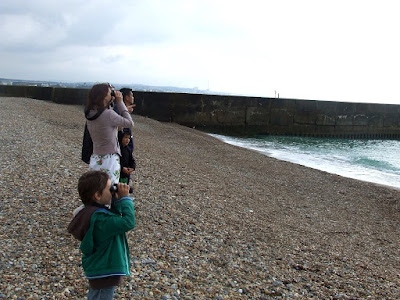 At about 10.50am a heavy downpour forced everyone to retreat from the beach. 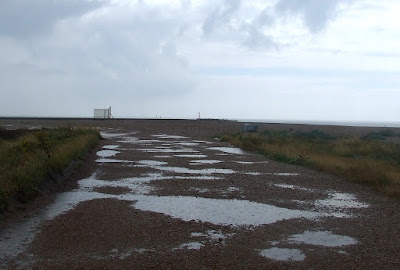 Afterwards, some had gone home but 10 people returned to continue the watch. Interestingly, after the storm, the visibility increased to excellent and the wind dropped to force 2 and the sea condition to sea state 1 after the storm had passed through. 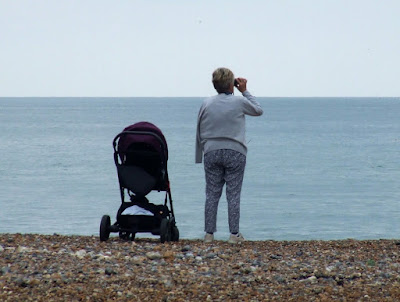 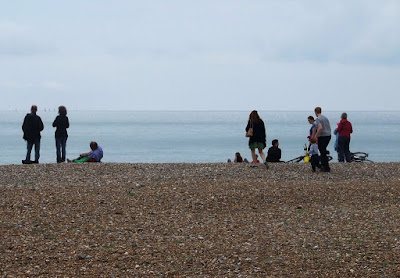 During the day more people arrived to take part with the watch, some by car, some on bicycle and some on foot.


The planned children’s activities run by Steve took place later than planned because of the weather. These included measuring out the length of blue whale (30m) 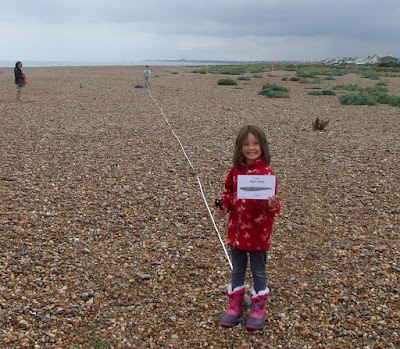 We then including some of the smaller species including bottlenose dolphin (3.5m), killer whale – orca (9m), humpback whale (15m) and sperm whale which at 20 metres is the largest toothed whale. 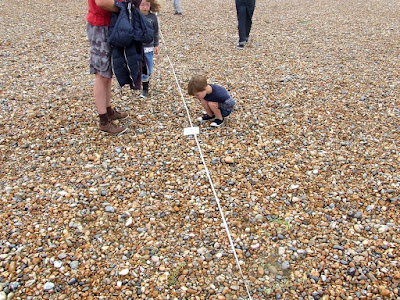 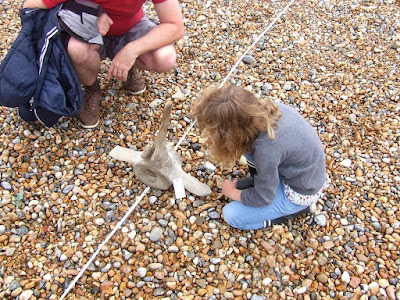 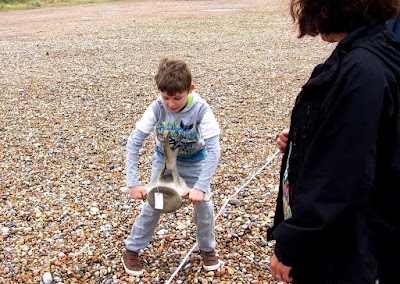 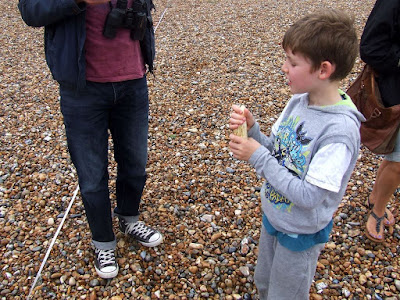 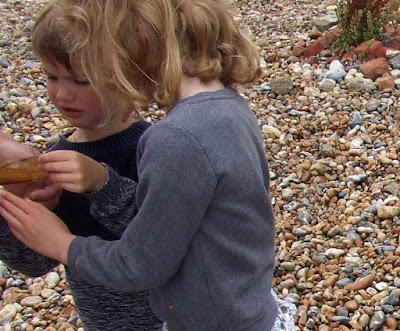 An activity also focused on threats to whales and dolphins. 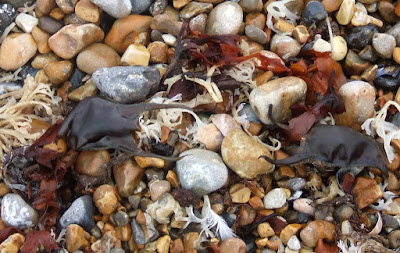 
The watch continued to 12.50pm (10 minutes short of the planned time when another heavy shower rolled in.

No sea mammals were seen during the watch, (but Steve reported to the watchers that a bottlenose dolphin was spotted at Seaford the previous day). Even so, negative data is also essential as part of the snap shot. Watchers were also encouraged to observe the sea birds which included herring and black-back gulls, terns (occasionally diving for fish), flock of turnstones feeding on the shore line and the occasional cormorant. 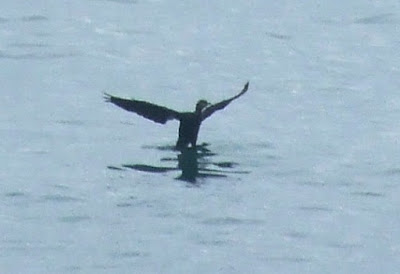 Shoreham Beach Nature Reserve leaflets were also handed out on the day, to participants and also to passing members of the public who came over to see what we were doing. A list of future events was included as part of the display stand and interested people were encouraged to visit the FoSB website and visit the events page. People taking part said they had enjoyed the event, despite the weather.

41 people took part in the actual watch and information was shared with passers-by.
Posted by Steve Savage at 20:00