Yesterday I visited the Onca Gallery in Brighton to see an exhibition called TruCost Super M-Art. The exhibition is laid out as a super market, but not one you will have been to before. Dirty Beach, a partnership between Brighton-based artist Lou McCurdy and eco-graffitist Chloe Hanksy, opened a unique supermarket in London Road, Brighton. 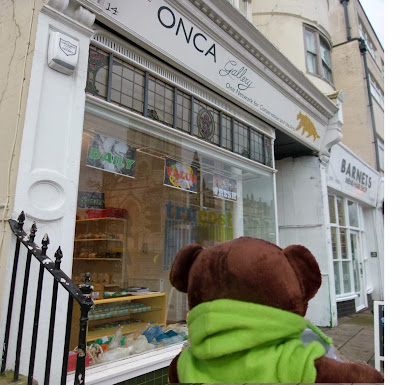 This ‘brand’ new supermarket will only display discarded plastic items found on UK beaches. The aim of the exhibition is to draw attention to the increasingly pressing issue of plastic pollution, waste and consumption using plenty of humour and irony as a powerful way to get the message across... 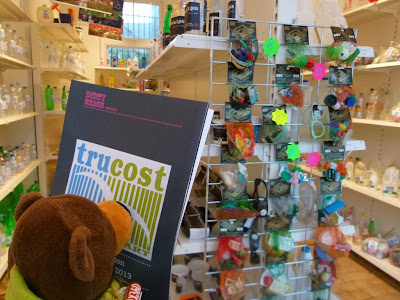 Some of the plastic debris was collected from my own beach at Shoreham, so I was keen to find out more about it. As you know, I have helped with beach cleans in many parts of the World from Sussex Beaches to global locations such as Florida and Hawaiian Island of Kauai. http://adventuresofedthebear.blogspot.co.uk/2013/09/worthing-beach-clean-event-for-marine.html


While I was in Kauai I saw the Laysan albatross and the many albatross chicks that die because they are accidentally fed plastic debris by their parents. 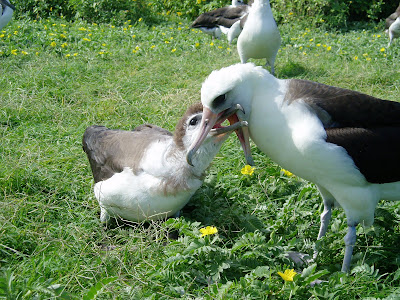 I was gifted a scientific numbered leg band from an Albatross chick, to wear as a necklace, in memory of the death of albatross chicks in Hawaii.


You can find out more about the Laysan Albatross and my trip on my weblog  at http://adventuresofedthebear.blogspot.co.uk/search/label/Albatross

We do not have albatross in the UK but we do have a gull-like bird, the fulmar, which suffers from swallowing plastic debris. 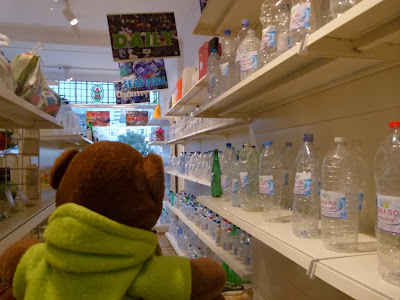 As I went inside I noticed hanging from the ceiling were banners – like you find in a normal supermarket . The first thing I noticed was the rows upon rows of plastic bottles on shelves. 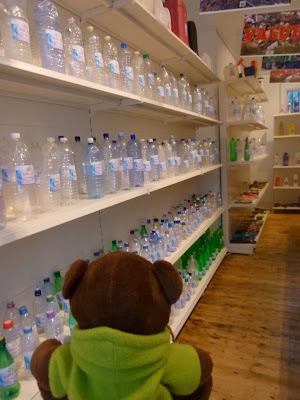 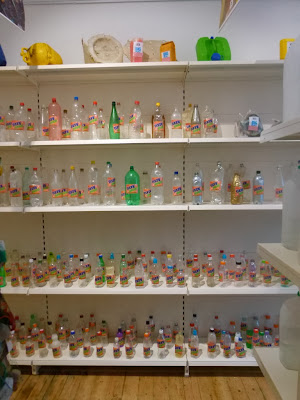 Many were clear drinking bottles but others were blue or different shapes and probably once held kitchen cleaning chemicals. 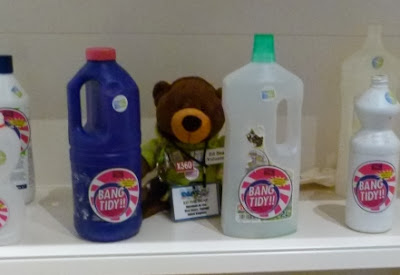 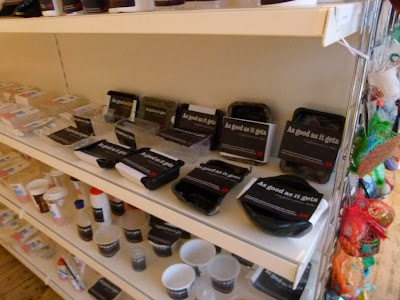 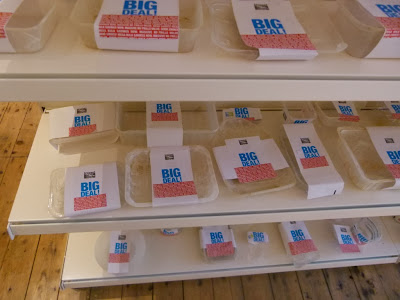 ...and tooth brushes and shavers… 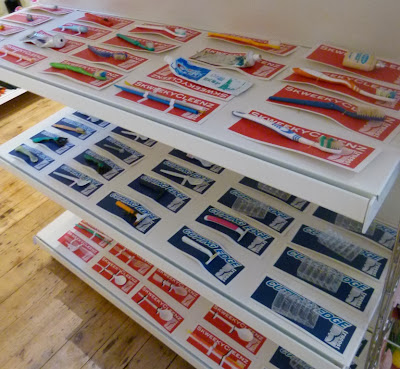 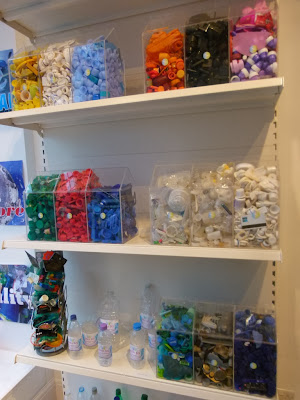 …and shoes and gloves 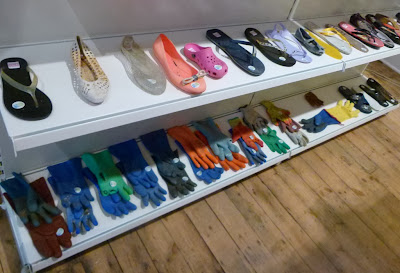 While it is possible to imagine that someone might drop the odd water bottle on the beach, the other food containers, tooth brushes etc should not even get anywhere near the sea.


While some animals swallow plastic others become entangled in it. This plastic was removed from cape fur seals I saw in South Africa. 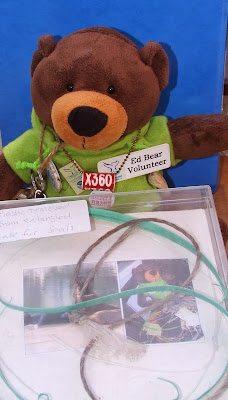 Divers from the Two Oceans Aquarium cut this and other plastic from then lucky seals.  http://adventuresofedthebear.blogspot.co.uk/2012/01/ed-and-abby-visit-two-oceans-aquarium.html


There were rows of disposable lighters and gun cartridges, many of these came from Shoreham Beach. As I have seen on my travels, one way that plastic debris can get into the ocean is via rivers. 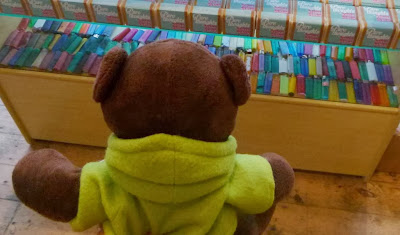 The shot gun cartridges probably ended up on Shoreham Beach from the river Adur after being washed down from further up river. Many towns and villages were originally built by rivers because of the need for either drinking water (for humans and livestock) or as a means of travel and transportation. In modern times, the towns have grown and many people now live near rivers and plastic and other litter is frequently dropped or blown into rivers.


I have been lucky to have travelled to the Hawaiian Islands 3 times now and I have learned to speak a bit of the Hawaiian Language. One of the words they taught me was Kuleana pronounced koo-l-eh-ah-n-ah.

One of the things used to make plastic is oil, which is a natural resource which is running out. So recycling and reusing plastic will help conserve the oil that is left. I have visited USA on many occasions. I found out that in America people buy more bottled water than any other nation in the world.
This adds 29 billion water bottles a year to the problem. To make these bottles, manufacturers use 17 million barrels of crude oil. That’s enough oil to keep a million cars going for twelve months. Imagine a water bottle filled a quarter of the way up with oil. That’s about how much oil was needed to produce the bottle. 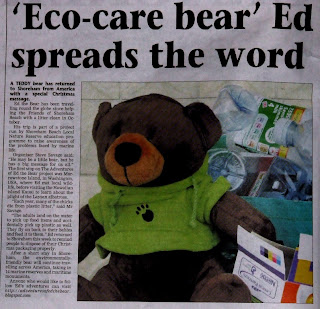 It often takes less energy to recycle something than to create it new – so it can save energy and reduce the impact of its production on the environment. Recycling one plastic bottle can save enough energy to power a 60-watt light bulb for six hours.


As Bella will tell you  http://seawatch17.wix.com/bella-world-of-water  it also takes a lot of water to make plastic about 1.39 litres of water to make a single 1 litre bottle of water. But if you look at the whole supply chain from drilling for oil to transporting the finished bottle to the store-even more water is used. By recycling you will be doing more than just stopping plastic getting into to the ocean.
I also saw some of Lou McCurdy's fascinating beach art 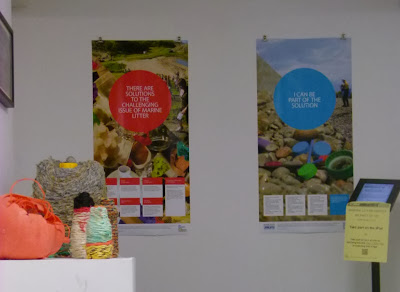 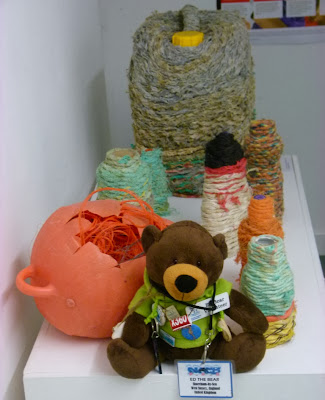 There is still time to go along to see the exhibition, it ends on 22nd December. 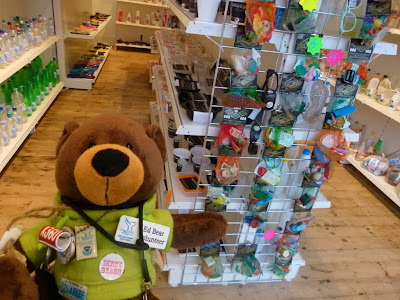 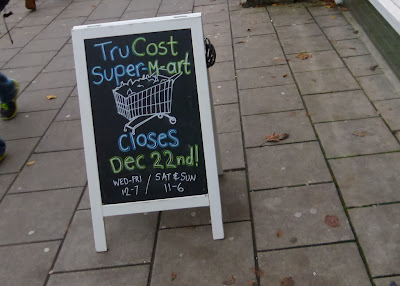 If you can’t visit the exhibition, then please share this message. Think carefully about packaging when you are shopping, reuse what you can and recycle things you can’t reuse. Remember, we all have Kuleana