Very soon we were heading to Seal Island, home of the famous Flying Great White Sharks that I had heard so much about. Of course I knew sharks can’t really fly but Seal Island is home to very special shark behaviour. I had seen whales leap (breach) out of the water before but this is a unique place where great white sharks breach out of the sea.

This spectacular sight of a nearly 1 ton shark launching itself out of the water is seen here at Seal Island on a very regular basis and Chris and Monique record up to 700 predatory events each year between April and September.The sharks are attracted to seal island because of the large number of seals present at this time of the year. 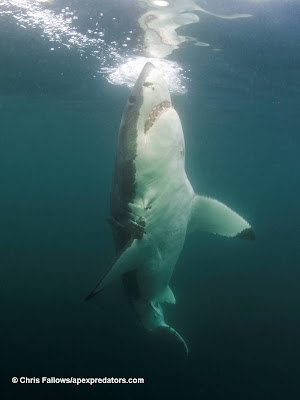 Monique said the sharks at Seal Island are also the largest average size sharks in South Africa and they can be 3.5 meters and many times bigger than this. The reason we see the larger sharks is that once Great whites get older their dentition (teeth) become broader which allows them to feed easier on seals. Seals have very thick blubber and this gives the sharks very good amounts of energy which means that it is a very valuable meal.


While the shark is a powerful predator it does not always manage to catch the seal it hunts. 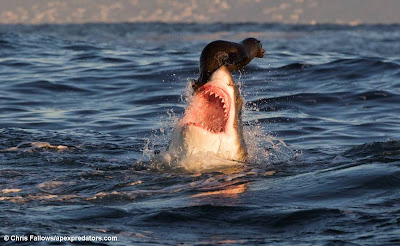 Cape fur seals are fast, agile and acrobatic swimmers and often they use these skills to escape from the shark.

A breach takes places when a Great white shark is hunting a cape fur seal. Chris & Monique explained that when watching these events we have to have great respect for both the hunter (the great white shark) and the prey (the cape fur seal). Life is very challenging for both animals and as such we need to respect that both shark and seal are just trying to survive and it is best to observe these events as objectively as possible.

While some people might think of seals as being so cute that we should protect them from being eaten by shark, this is just nature. Monique reminded me of what she had told me about the eco system. So this means that big sharks help to keep seal populations at the right level for the ecosystem. If sharks did not eat some seals then the seal populations would get too big, the seals would eat more than their share of fish in the ecosystem and other animals would go without. The ecosystem itself could the collapse. Nature is good and keeping itself in balance.

Today we were very lucky with our sightings. We witnessed 3 predatory events as shark hunted seal. We also got to see a breach on a decoy. 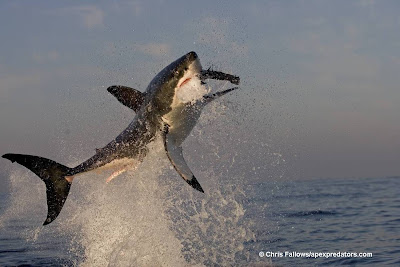 Chris was the first person to start using fake seal decoys. They tow the decoy slowly behind the boat and sometimes they get very lucky to see a breaching Great white shark very close to us.

Monique said it’s very exciting and it also provides an opportunity for our guests to see this incredible behaviour. Eco tourism is vital to shark conservation. Sharks are not easy animals to see, you have to look specifically for them and you need people who know what they are doing to treat them with the respect that they deserve. If eco-tourism is done correctly people will come away from the experience as ambassadors for sharks and this ultimately will help in the future well-being of sharks. I will certainly be telling lots of people about my amazing experiences here with Chris and Monique.

Great white sharks have become an endangered species directly due to pressure from people. Great white sharks have been threatened by illegal poaching and sport fishing before they became a protected species in South Africa in 1991. Even so offshore long lining, the Natal Sharks Boards bathing nets up our South African East coast and various other implications from people.


Chris said there are many people that love sharks, especially kids. Chris and Monique said they get emails almost daily from kids all around the world telling them how much they love and respect sharks. Children are vital to the future of all animal conservation so Chris and Monique always encourage those that show such an early appreciation for sharks.

A lot of other people do not understand sharks and therefore are afraid of them. Often people are afraid of something because they know nothing about them, and this is very true of sharks. Yes, sharks are predators and as such when they hunt they can be aggressive and ferocious, this is what they do. They don’t waste anything and they only kill to eat. Sharks have been living in the oceans since the time of the dinosaurs - so the sharks were there first, it is their domain that we are entering.

Find out what happens next in the final part of my adventures with these amazing great white sharks.
Posted by Steve Savage at 09:02