Learning about how to study shipwrecks and more...

Hi all
I have had such a busy week I have not had time to write up my blog. So this is a report of the last few days of training here with SAHRA.

In order to complete our qualifications, we had to complete modules as part of our diving practical experience. Thanks to Frog Squads submarine I could join in. There was a lot of work to be done and I was soon in the middle of all the action. The students and I, under the supervision and guidance of the expert professionals, set to work on planning and performing the initial task on the shipwreck, named ‘The Barrel Wreck’. It was called Barrel Wreck after all the barrels found on the site. 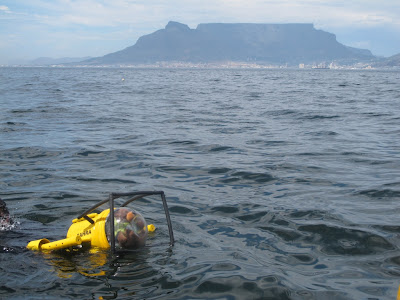 This first part of the survey work included laying down baselines forming a grid that would mean different parts of the objects could be related to the different squares. Control points position the wreck to its physical location. 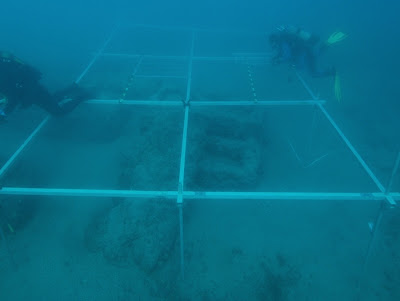 Once this was done our next task was to secure control points in order to do measurements which would position specific features in relation to one another and on the surrounding network. It was very complicated for a little bear but with the help of the other students I soon got the hang of it. 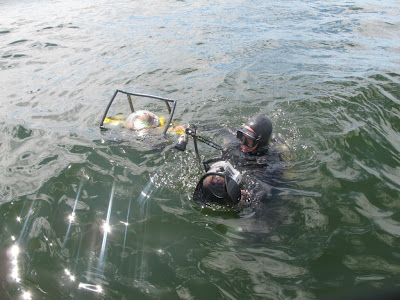 Once this important network had been laid down we moved onto the next module, conservation. Vicki and Jon gave a briefing to the students about conservation methods and taught us how to use the equipment especially designed for underwater conservation work. Ship wrecks slowly rot or rust and it’s important to tell what state the wreck is in and then see what can be done to preserve it.

We were then given the opportunity to use the equipment on parts of the ‘Barrel Wreck’, testing PH and corrosion levels of the different materials making up the wreck.

I got to drive the boat to the wreck site which was very exciting.

At the end of every dive day, there was no time to rest as we had to record all of the work we had done on the dive. This was a perfect opportunity to learn more about the type of survey work needed to be done for an underwater archaeology project both in and out of the water. This also showed how important it is to record everything straight after a dive, before you forget anything.

The post dive recording includes transcribing written material from underwater slates to hard copies, (you can write underwater using a slate), preparing the slates for the next day with fresh sheets, and plotting the measurements to Site Recorder, a computer program designed specifically for plotting and positioning underwater archaeological finds. 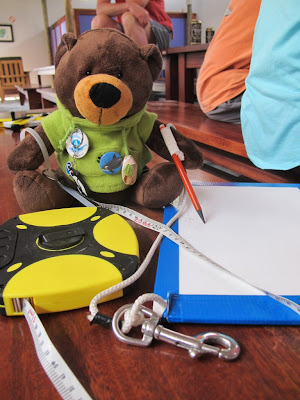 I helped with preparing the equipment, measuring tapes and slates, for the following day’s dives. I was also shown how to use Site Recorder. It was so interesting.

My adventure did not end with data collecting and survey recording; I was excited to join the land team with their research projects to learn more about the maritime environment on Robben Island and how it was connected to land sites. Here the teams involved me in the various projects which were; oral history (spoken history), grave sites, the walking tour, a ceramics collection and the geophysical survey. These projects focused on Robben Island as a world heritage but also on its potential to tell the many layers of history that Robben Island holds.

The SAHRA Team were thrilled to announce that all the students, including me, had successfully completed all of the modules for both NAS 1 and 2. I hold in my paws the NAS card to proudly hold up as evidence of his NAS qualification. I also got a special congratulation from Sophie.

I stayed with Sophie after the course and made a few more dives.

However, on my last dive the sea became rough and it was difficult to control. My submarine was bashed about and suddenly it started to leak.

All of a sudden a curtain of bubbles appeared in front of me and then a face. It was one of the Frog Squad Team. They had been keeping an eye on me as soon as they saw I was in trouble they swam over. With a diver on either side they took me back to the surface and back to the boat. Phew! Thanks Frog Squad.
Posted by Steve Savage at 07:33